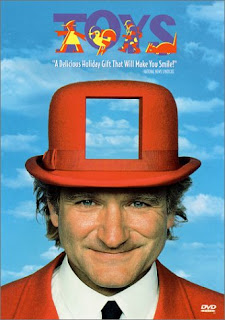 I'll be the first to admit our rubric for categorizing movies as "Christmas films" gets more than a little convoluted, particularly when considering movies that only contain a few scenes set around the holidays. As a rule of thumb, this isn't enough to warrant yuletide classification. Most movies like this primarily use the season to mark the passage of time (think the Harry Potter films, American Psycho, Little Women...), which I don't consider sufficient for discussion here.

I dismissed Toys years ago for that reason - the movie starts and ends at Christmas, with the rest of the film set in the intervening year. I remembered that much from seeing it a handful of times decades ago (including in the theater, in case anyone thought I was younger than I am). I hadn't really bothered to think much further on the subject or considered there might be more to framing the film with the holidays than telling you a year passes and justifying a December release.

Well... I guess I should have given it more thought or rewatched it sooner, because there's a lot going on here, starting with an answer to a question I never thought to ask: "What the hell is this supposed to be?"

Because I actually think the answer is "a reimagined version of Toyland." It's clearly not a direct adaptation (though the various takes on Babes in Toyland are so different, I'm not even sure what "direct adaptation" means in this context), but the elements seem to be drawn from that source (I mean, the title is a pretty big giveaway). The premise is heavily deconstructed, transformed, and rearranged, but many of the core concepts and images are present.

On top of that, the movie's use of Christmas as the end of one patriarch's life, followed by a year-long coming of age story for its protagonist, could be read as an allusion to the whole New Year/Golden Bough thing that keeps popping up in Christmas media. I might be reading too much into this, but Toys kind of bends over backwards to feel archetypal, so I wouldn't write off the possibility.

The story is fairly simple. The founder of "Zevo Toys" is dying, and he fears for the future of his company. His son, Leslie, played by Robin Williams, is too childish to take over, and his daughter is... well... honestly, I don't want to spoil that, in case anyone decides to track this down. Instead, his last act is to turn it over to his brother, Leland, a military general disillusioned with the world's shift towards peace.

Leslie welcomes his uncle, despite signs the general wants to take Zevo Toys in directions his father wouldn't have approved of. But as time goes on, Leland's leadership becomes more and more suspect, as he begins secret projects and experiments. Leslie eventually discovers his uncle isn't just building war toys, but is in fact building toys that can quite literally be used in war. Along with his friends and family, Leslie breaks into the factory to stop him, culminating in a war between Leland's deadly drones and a warehouse full of windup toys.

Leslie and Leland fight one-on-one, before Leland is eventually wounded by one of his own creations. By Christmas, the company is in Leslie's hands, and he makes amends with his uncle by releasing a line of toy soldiers.

Granted, I'm glossing over... a lot.... I didn't even mention Robin Wright's Gwen, Leslie's love interest, or LL Cool J's Patrick (Leland's son and Leslie's nephew), or Arthur Mallet's character who... wait a minute. Didn't Arthur Mallet also appear in Hook just a year earlier? Did Robin Williams just wheel him around from movie to movie? Regardless, there are a lot of characters I didn't mention, and most of them are ostensibly important, though they're also kind of interchangeable in the third act. By that I mean no one really has special skills that come into play in the big battle. It's odd, because they actually set up some of those characters with special abilities - Patrick in particular has an almost superhuman ability to hide in plain sight, but it's only used for jokes and never impacts the story. I suppose Joan Cusack's Alsatia (Leslie's sister) was arguably an exception, but I promised not to talk too much about her.

That ties into the movie's largest flaw: its characters feel like one-dimensional jokes superimposed over a grander story. Maybe that's intentional: the same could be said of Babes in Toyland. But whether or not they meant to do that, it doesn't do the movie any favors. The characters feel like clowns running around distracting you from a far more interesting movie.

And, for what it's worth, I absolutely mean the compliment embedded in that criticism. This is a beautiful movie, in terms of how it looks, sounds, and even feels. This is a fairytale, and when it's not trying to be something else, it's glorious. I'm tempted to give its shortcomings a pass and recommend it in spite of its flaws.

But those flaws get a bit too tedious, particularly in the second act. The movie devotes a lot of time to Robin Williams's ad-libbing, and it just doesn't work here, at least not the way it's edited together. Leslie never feels like a complete character, and given the entire movie is a coming-of-age story built around him, that's a major issue. It doesn't help matter that some of Williams's jokes aged poorly. I don't think anything is aggressively awful, but it's certainly a reminder that even the best comedians in the '90s didn't always adhere to the "punching up" rule.

I should also note there's a caveat to my earlier compliment about how good the movie looks. During the big fight at the end, the editing gets... weird. They start incorporating bizarre sequences playing with the frame rate. I'm assuming they were trying to make everything feel frightening and erratic; instead, it feels like it's made for TV. It's an unfortunate misstep, given how good the visuals are in the rest of the movie.

I'll wrap things up by highlighting an element I liked unconditionally: the soundtrack. While Toys doesn't quite cross over into "musical" territory, it comes surprisingly close, featuring a handful of diegetic songs and several more that come close. And... okay, music is always subjective, and I know I'm about as far from impartial as is humanly possible, but...

Look. I grew up in the '90s, so if you feature songs by Tori Amos and Enya predominantly in your movie, I'm going to be happy. Also, the movie opens and closes with an original Christmas song that incorporates both the literal and musical themes of the movie, and I just love it. I can't swear it's not just nostalgia talking (again, I saw this movie in the theaters, and music is one of those things that just sticks with you), but I'd be far happier hearing "The Closing of the Year" over the radio every December than damn near any holiday song that's actually taken off in the past three decades.

This is absolutely an odd movie, and I think its detractors are right to conclude it doesn't work as a whole. It's trying to be two movies at once: a timeless fairytale about the struggle between innocence and violence, and a comedic vehicle for Robin Williams to play yet another man who never grew up. Those two endeavors never come together, and the one that actually holds up (the fairytale) is held back by a barrage of diversions.

But for all its faults, the fairytale underneath this really does work. It commits to the strange premise, mixing fantasy and reality into a fascinating blend. This isn't a great movie, but it comes closer than it gets credit for. I enjoyed the movie overall - I just wish it was a little better, so I could justify a recommendation.