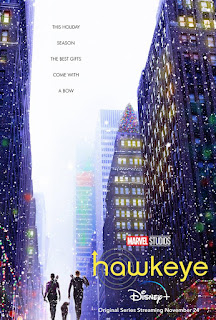 So far, the Disney+ MCU shows have been something of a mixed bag. I don't think any have been awful, but the level of quality has fluctuated wildly from series to series, with WandaVision being by far the best and The Falcon and the Winter Soldier being the most disappointing. Good or bad, they've all boasted impressive production values and have all delivered some of the quippy dialogue that's become a hallmark of the Marvel Cinematic Universe.

Hawkeye joins Iron Man 3 in sporting a Christmas setting. Between the two, I think Hawkeye makes better use of the holidays -  in Iron Man 3, it mainly just felt like a callback to the director's filmography. Here, it serves to heighten the tension, tie in to themes of family, build up a sense of the surreal, and... well... okay, it's also kind of making a bunch of allusions to Shane Black movies, but it's not like I mind.

Of course, the Christmas setting also means it's fair game here, so let's dig into the second-best live-action MCU series to date (sorry, Loki: it was close, but I've got to call it like I see it).

Like all of these, the show is something of a blend between the Netflix model of producing long movies broken up into chapters and the traditional episodic TV experience. Disney+ releases weekly, so the individual episodes need defined arcs and strong cliffhangers, which for the most part Hawkeye delivers. But because it's not broadcast, it's also free to indulge in long-form storytelling. This is the area where the show falls flat. More on that after the synopsis.

The main characters are Clint Barton and Kate Bishop, both of whom have claim to the titular moniker. The first episode gives us a little backstory on Kate, whose father died in the alien invasion back in the first Avengers movie. Kate, then only a child, nearly lost her life as well, but was saved by Hawkeye. She spent the next decade or so (what year is the MCU on again?) studying archery, hand-to-hand combat, and so on. By the time we're up to the present, she's a bonafide badass. She's also a college kid, though, so she's not exactly prepared for what's coming.

Her mother's got a new fiance with a penchant for swords. Kate suspects he's up to no good, and in the process of investigating stumbles into an underground auction for items stolen from the Avengers compound. Said auction is then attacked by the Tracksuit Mafia, a somewhat comical gang working for a larger criminal empire.

To avoid being identified, Kate steals an item being auctioned - the Ronin costume worn by Clint in Avengers Endgame - and puts it on. She escapes the gang for a time but is eventually tracked down, where she's rescued by Clint, who's sacrificing his vacation to go after the suit, an object he'd rather not remain in circulation. Also of significance is a wristwatch with some unexplained connection to Clint's wife.

Regardless, they're eventually captured by the Tracksuit Mafia, where they meet their leader, Echo, the series's third main character. Turns out, her father was killed a few years earlier by Ronin (oops), and she's looking for vengeance. She's a badass fighter capable of copying the style of anyone she watches, and....

Look, she's getting her own Disney+ series, so they're trying to establish her here. The important thing to know is she's a decent person at heart, but she's out to get Clint for something that happened in Endgame, something she doesn't completely understand.

There's a big fight with some cool trick arrows, and Kate and Clint get away, only to unintentionally show up at Echo's home while tracking down that watch. Kate and Echo fight while Clint is attacked by someone else on the next building over. He actually thinks he's up against Echo, since his attacker is a young woman who's extremely adept in hand-to-hand combat, but when her mask is pulled off, it turns out he's up against...

The series' fourth main character, Yelena Belova, who was hired to assassinate Barton in the post-credits scene at the end of Black Widow. The money's nice, but really she wants revenge for what she assumes is his role in Natasha's death. The important thing to know is she's a decent person at heart, but she's out to get Clint for something that happened in Endgame, something she doesn't completely understand.

After everyone escapes, Yelena tracks down Kate to try and get information on Barton's location. In the process, they sort of become friends - again, Yelena's hurting, but she's a good person. Also, the two of them together is just delightful. I don't care how or where, I want a team-up with Yelena and Kate.

Meanwhile, Clint dresses as Ronin, tracks down Echo, and the two fight. He wins but doesn't kill her. Instead, he shows her his face, and gives her a little information she'd been missing: the only reason he'd been able to kill her father was he received a tip tracing back to the leader of the criminal organization he worked for (and she still works for), a man Echo considered family.

Speaking of family, it turns out Yelena was hired by Kate's mom, at the request of that same crime boss. This tip is passed to Kate by Yelena, who thought she deserved to know. And Kate shares it with Clint, who's able to ID the man at the top: The Kingpin.

This kind of got spoiled in advance when Vincent D'Onofrio got a little careless on Twitter, but it's still nice having him back. Whether this is technically the same version of the character we saw in Daredevil remains to be seen, but either way, he's just wonderful in the role.

That said, the role isn't quite as nice to him this time around. The reveal comes at the end of episode 5, leaving just one chapter for him to make an impression. And, in case you'd forgotten, there are four main characters, each with one or more story arcs needing resolution. If that sounds like a tall order... yeah, it is, and the last episode doesn't pull off any miracles. 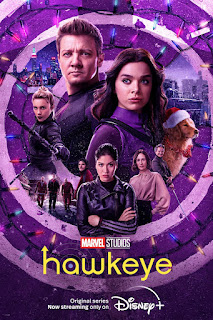 This isn't to say the last episode is awful - there are some solid fights, some fun interactions (the best once again being between Kate and Yelena), and D'Onofrio is always great. But between setting up an upcoming Disney+ show for Echo, continuing Yelena's story, having Kate deal with the revelation her mother is a criminal, having Clint escape death, and squeezing in a big fight against the Tracksuit Mafia... it's just way too much for anything to get the time it needs.

And that's the problem with the show in general. There's at least one too many story arcs. Either Yelena or Echo should have been put on pause, and the other should have gotten more time. There are literally two anti-heroines out to kill Clint based on his past. We're repeating plot beats in the same show with different characters, and that's never a good idea. Particularly because this "series" is on the short side. Six 40-50-minute episodes add up to something longer than a movie, but not much longer. Maybe with a couple more episodes this could have pulled it off.

The good news is those episodes would have been welcome. Because while the structure and metaplot were a mess, the meat of the series was wonderful. It was an absolute joy seeing Kate interact with Clint and Yelena. This was on a whole the funniest Disney+ installment yet and one of the funniest MCU pieces in general. On top of that, there were some absolutely phenomenal action sequences, particularly the episode three chase.

I wish the whole had added up to more than the sum of its parts, but the parts alone are more than enough to justify a recommendation to anyone who enjoys the Marvel shows and movies.

Oh, and one more thing. Keep watching through the credits at the end of the last episode. Unless I'm forgetting something, I believe this is the best mid-credit sequence we've gotten anywhere in the MCU.