Shaun the Sheep: The Flight Before Christmas (2021) 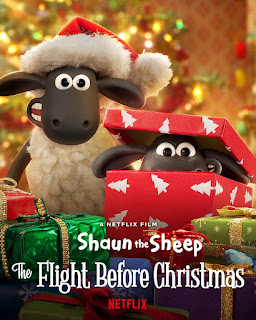 If you've never seen any Shaun the Sheep, you can jump in at any time. There's a television series, two films, and multiple specials. All of them feature roughly the same premise: Shaun and his sheep pals live on a farm. Shaun is much more intelligent than the farmer knows (as are the other sheep, if less so), and comedy ensues. The farmer (who is an idiot) and the farmer's loyal dog often come up with plans to improve the farm, which often come into conflict with capers run by the sheep and other animals.

And it's all wordless. There's no dialogue in Shaun the Sheep, only mumbles and expressive animal noises. The simplicity lends itself to brilliantly outlandish physical comedy.

This special might be the funniest entry I've seen in a very funny series. And it's the perfect length at just half an hour. I always like Shaun the Sheep, but I feel it starts to wear out its welcome if watched for too long in one sitting. (This only applies to adults, of course. I imagine young kids could watch this indefinitely.)

In this holiday special, it's almost Christmas, and the sheep are decorating the inside of the barn. Shaun is disappointed at the tiny size of the stockings they have to hang up, and he figures that larger stockings would mean more presents. He sees some big socks hung to dry in the farmhouse and enlists the baby sheep, Timmy, as his helper to snatch them.

But things go wrong, and Timmy ends up in the back of the farmer's truck, on route to a holiday market where the farmer hopes to sell some terrible homemade fizzy drinks that he made by badly following an online recipe.

Shaun, Timmy's Mother, and the others race after the truck, eventually reaching the market. After another series of comic events, Timmy (now hiding in a gift box but able to walk) chases after the farmer (now dressed as Santa). Unfortunately for the farmer, he's beset by a horde of children who also mistake him for the jolly old elf and he doesn't see Timmy. Unfortunately for Timmy, one kid thinks that gift box is for him, and he sees the other sheep coming after him too late.

Now the sheep have to chase the kid's family and break into a suburban house, apparently owned by two influencers who love their kid but are more concerned with how good he looks in pictures. Meanwhile, the farmer's dog has been chasing the sheep in turn, only to fall into some frozen water, kicking off one of the funniest bits of cartoon comedy I've ever seen. I don't want to tell you. It's so good.

Shaun gets into the house when no one is around, but Timmy's upstairs with the kid, pretending to be a toy. Finally all the sheep burst in, led by Timmy's Mother, and search the entire house in a rush. Shaun rescues Timmy, but the kid is now on their heels. Another chase sequence later, they escape down a holiday-light zipline, but Timmy falls - only to be caught by the farmer's dog, driving a flying sleigh powered by terrible fizzy drink.

Timmy sees that the kid is lonely and offers him his precious hoof-made Santa doll, and after the parents have a scare about their kid's safety, it looks like the family is going to be okay. The sheep all fly home in time for a lovely party.

Tons of fun, lovingly animated, sweet and hilarious, The Flight Before Christmas is available on television this season in the UK, Australia, and much of Europe - and on Netflix almost everywhere else.