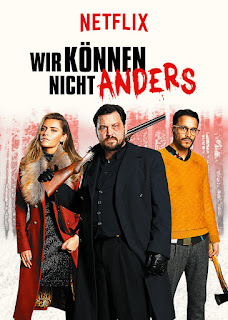 I'm fairly certain Wir Können Nicht Anders is the first German movie we've looked at. I should probably note you won't have much luck finding this under that title - it was released in the US as "Christmas Crossfire," with the "Crossfire" part written in blood. I understand badly translated titles is kind of a foreign language Christmas movie tradition, but this one feels particularly egregious. While there is some violence and a touch of suspense, this isn't horror or even action: it's a comedy. A dark comedy, certainly, but nothing like that title implies. A closer translation (at least according to Google Translate) would be "We Can't Help It," which makes infinitely more sense. I'll be sticking with the German name, because I can't bring myself to keep typing Christmas Crossfire.

Tonally, this bears some similarities to US dark comedies (think movies by Martin McDonagh, such as In Bruges). If I knew virtually anything about German cinema, maybe I could tell you whether there's a connection, a like source, or just a coincidence, but this ain't my area of expertise. I will say this movie seems to be tipping its hat towards American productions (one of the main characters is a scholar of the English language, and the soundtrack contains some songs in English), so it might be a homage to Hollywood productions. Or maybe there's a long line of German films with similar tones to Wir Können Nicht Anders - like I said, I'm a little out of my depth here.

Regardless, if you're looking for a point of reference, McDonagh is a good start. If you're not familiar with McDonagh, you could also compare this to aspects of Quentin Tarantino movies, though this wasn't anywhere near as violent.

Summarizing movies like this is usually more trouble than it's worth. By design, the stories are complicated and driven by random happenstance, absurd decisions, and numerous twists and tonal changes. That said, I feel I should at least try and offer an overview of the premise, so here goes.

The story primarily centers on two characters: Edda, a young woman heading home for her aging father's birthday (which is itself right before Christmas), and Samuel, an associate professor. At the start of the movie, Edda begins a relationship with Samuel and quickly convinces him to travel to her hometown with her in his van.

On their way, they get separated when Samuel investigates a man calling for help. In the process, Samuel saves a man who's apparently about to be murdered for sleeping with the local businessman/crime lord's wife. Meanwhile, Edda attempts to get help from a police officer who coincidentally knew her when they were young. This doesn't go so well - the cop has virtually no interest in her story and tries to sexually assault her. She gets his gun and winds up killing him in self-defense, though obviously she's skeptical anyone will believe her.

Meanwhile, Samuel is eventually captured by the boss, who.... Okay, here's the thing I like about this movie. The bad guy, like almost everyone in the small town this is set in, is kind of pathetic. The town is dying, and his attempts to reverse that by building a thriving industry are failing. Rather than accept this, he doubles down on presenting himself as a "real man." He's ultimately a broken, hurt man projecting power to hide insecurity. This doesn't mean he isn't dangerous - he absolutely is - but he's not actually all that effective.

As the movie continues, the cast of significant characters increases - the boss's wife becomes one of the film's more interesting characters. Initially, I assumed they were going to make her an instigator, but as the movie progresses it becomes clear she is mostly trying to minimize the destruction and is justifiably annoyed by the posturing around her.

There's a lot more we could go into. Each member of the gang has their own personality and issues. They're sad failures of people trying to will themselves into relevance, and it's clear it's never going to work.

The man rescued by Samuel is no exception. He sees himself as a hero, driven by true love and unafraid to die, but it's all presented as childish nonsense that brings nothing but suffering.

It takes its time to get there, but the movie culminates in a sequence where the boss, fully broken and desperate to prove he's a much a man as he claims to be, dresses as Saint Nicholas and starts hunting the rest of the cast, including several characters who had little or nothing to do with what's going on. Even this is more or less a failure: he usually misses or wounds his targets, and the whole sequence is played for laughs (complete with cartoonish chase music).

His final showdown with Samuel is a bit less silly. He holds the academic at gunpoint, pontificates about a number of subjects, then shoots himself in the head. This has the added bonus of getting Edda off the hook for the dead cop, since the authorities just assume that was one more casualty of the guy who went on a shooting spree. We learn this at a Christmas mass while also getting confirmation a bunch of injured characters pulled through (including the bad guy's wife, though her lover wasn't so lucky).

After that, the dead villain and his gang dance in the town square. As far as I can tell, this was more or less included for fun.

Thematically, the movie seems to be an indictment of small-town entitlement. Several times we see men irrationally blame others for the downfall of their way of life and as a result do nothing to actually address their problems.

So, that sure as hell translates.

As does the "men" part - this movie is also an indictment of toxic masculinity. Most of the men in this movie act entirely irrationally in an attempt to appear strong, but it almost always comes across as comical and self-destructive. I'm less clear whether we're supposed to see Samuel as above that, as fighting the instinct to join them (he falters once or twice), or even as an overcorrection. I don't think it's the latter, but there were a few moments I wasn't able to get a read on (again, I'm far from an expert on German cinema or culture).

While I'm inclined to like those themes (they adhere pretty closely with my politics), I do think they were a bit heavy-handed, particularly since they were repeated several times each. A more isolated sequence where immigrants were unable to help the protagonists due to limits on their rights worked better in my opinion - sometimes less is more when it comes to theme.

The area this movie falls a bit flat is pacing. Despite a relatively short runtime, the movie drags. Some of that may be intentional - you get the feeling time is supposed to drag in the dying town this is set in - but I'm not sure that forgives the issues. The story is just a little too convoluted with a few too many twists to maximize its impact.

The Christmas elements here are in some ways a bit odd. Centering Edda's father's birthday as a plot point instead of the holidays came across as a bizarre choice - maybe there's a reference here I'm not connecting or a joke I missed about Jesus or something? Despite being set over the course of a single day, the first half of the movie largely ignores the holiday, though the last half heavily features decorations and discussions. Its place in the movie fills similar roles you'd expect from American action movies (though, again, this is less action than dark comedy). It's used as juxtaposition, to give everything an otherworldly sense, as a catalyst for introspection, and even as an excuse for a killer to dress as Santa for a few scenes. Honestly, it almost feels like it's checking off the usual reasons, which makes me think this is largely intended as a tongue-in-cheek nod to American movies. Again, I don't know a damn thing about contemporary German cinema, so these could just as well be part of an unrelated trend of tropes inherent to that tradition - feel free to call me an idiot and correct me in the comments if you know something I don't.

I generally liked the humor and tone, but the movie never really felt like it crossed over from "pretty good" to "great." Or even "really good," for that matter. I can't say for certain some of the impact wasn't lost in translation, so it's entirely possible those familiar with the language and culture will find this more enjoyable than I did. Overall, I found this solid, but I can't imagine recommending it over existing dark comedies.