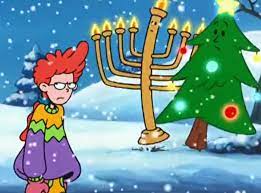 This episode has actually been on my radar for a while. I have vaguely positive memories of the show being around, even though I was in high school when it premiered, and we're always looking for ways to build up our archive of Hanukkah content. So when I saw that the show landed on Disney+ this year, I sought it out.
Unfortunately, this is just a boring episode of what (judging only by this episode) was a mediocre example of animation in the 90s. In fact, between the fashions, the inline skates in the opening, and the character dynamics and stereotypes on display - this is aggressively 90s content.
The only thing I remembered about the show was the absolute earworm of a theme song, but the animation of the song opens with a few seconds of a dream sequence where the main character is fighting off some... racist caricatures of native people? Yikes. So it's obvious from the beginning that not everything has aged well about this series.
On the other hand, some brief research tells me that the show at least attempted a bunch of progressive and teen/tween topics which would have been less common at the time. In this episode, for example, I appreciated that Pepper Ann's parents seem to be divorced but amicable co-parents.
Sadly, there wasn't much else to appreciate about this episode.
Twelve-year-old Pepper Ann is excited to celebrate both Hanukkah with her mom's family and Christmas with her dad's. She's so excited, in fact, that she demands to portray both holidays in the "celebrating diversity" holiday play at school. She has trouble finding time to work on the play between getting ready for both holidays and helping her friends with their holiday plans: Nicky is on an over-the-top generosity spree that backfires on her, and Milo is excited about visiting his dad in Hawaii, but he gets stuck delivering muffin baskets for his mom's business instead.
At the play, she gets her lines mixed up to her intense embarrassment. She then overhears a conversation between her parents that then makes her think that they are going to make her choose between Christmas and Hanukkah. She spends half the episode attempting to catalog the best things about each holiday in preparation for an ultimatum that is obviously never coming.
Most of the episode would have been right at home on any of a dozen live-action Disney Channel sitcoms; the only exception was Pepper Ann's habit of talking to visions of herself or other imaginary people as she works through her problems. (This did remind me a bit of the animated inner monologue in Lizzie McGuire, even though this is wackier.) Here this ultimately manifested as an imaginary argument between a talking menorah and a talking Christmas tree, in which they each try to convince Pepper Ann to choose them.
She realizes that the important thing in both holidays is family, and she won't choose between her family members, so she won't choose between the holidays. She then announces this to her parents, to their confusion. (The overheard conversation turned out to be about her grandmother choosing a doctor or something, it didn't make much sense.)
One of the problems I had with the episode was that the writing seemed inconsistent. Pepper Ann is supposed to be twelve, but the animation and writing make you think the kids are teenagers... right up until the plot requires them to do something so dumb that it would be unbelievable for even a little kid.
The B-plots wrap up with Nicky admitting that she got frustrated and jealous of her friends after giving away all her stuff and only receiving donations to charity as presents, and Milo wins a trip to Hawaii for one single good deed, but convinces the giver to share it with Nicky and Pepper Ann as well.
As a Christmas episode, it's not as bad as some - the subplot about Nicky trying to balance her desire to give and do good with her own needs is occasionally amusing, even if the resolution is that the real treasure is friendship or something.
But as a Hanukkah episode, it was pretty bad. The writing could have gone the extra mile here and found things that she liked about both holidays without retreating into jokes about eight days of presents and socks as gifts.
Plus, a few moments made me question the writers' knowledge. Pepper Ann's mom's chirpy description of what she likes about Hanukkah early in the episode felt like a reach. She wears a giant dreidel hat and one of the things she loves about the "holidays" is the decorations? Are you really talking about Hanukkah there? There's also a rushed explanation of the Hanukkah miracle awkwardly wedged in later for the presumably gentile audience.
This wasn't purposefully awful, but it was very boring. Maybe other episodes of the show are better.
Comedy Episode Lindsay Sucks