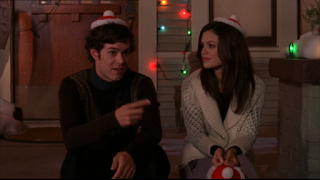 I know, I know. We usually collect things like this into one big post and do them all together. But even with The O.C. being quite a bit better than I'd expected, it still takes some effort to make it through a series this far outside of our wheelhouse (I mean, seriously - this show doesn't have one single superhero). Plus, this is an hour long; not a measly thirty-minute sitcom. And, to top it all off, we're still unpacking from our move and need to stretch this stuff out.

At any rate, the second installment of The O.C.'s annual Chrismukkah specials is at once better and worse than their first. Or maybe it's better because it's worse. It feels like the writers have realized and embraced the fact the show's dramatics are hilarious, because it feels like they've stopped trying to hide it. This episode features some ridiculously melodramatic concepts, but I never had the sense anyone was pretending otherwise. It helped that several minor characters involved in the prior year's shenanigans were back and seemed to have a sense of humor about it.

The driving conflict for this episode centered around Lindsay, a character who wasn't in the first season but seems to play a pivotal role in this one. She's Ryan's new girlfriend. Also, this episode reveals that she's the illegitimate lovechild of Caleb, the grandfather of the family Ryan's living with.

This little revelation gets dropped on everyone at the start of the Chrismukkah party. Lindsay, who'd gone her whole life thinking her father was gone for good, is understandably angry, as is Seth's mom, who never knew she had a sister. That said... I kind of felt like they were a little too upset. The writers snowballed the reveal into a "we'll need to cancel Chrismukkah" moment. But getting there meant having these two characters entirely miss the upside until another character pointed it out to them. I get their mutual anger at Caleb, but not their indifference toward each other. That was poor plotting.

At any rate, they let one of the teenage girls from the prior year step in to save Chrismukkah. Her plan was to put out a bunch of decorations for Lindsay, which seems like an idiotically simple gesture, but the run-time was running out, so it works perfectly. Chrismukkah is saved, and the family is bigger and better than ever. Or something.

Oh, also Caleb's new wife is having an affair, but that's mostly played for laughs. Maybe it's a big deal in a later episode, but it mostly felt tacked on here.

Despite the awkwardness around the story, the jokes - of which there were many - were generally funny. As was the drama, but - again - I'm pretty sure that had to be intentional. All in all, it was a well executed if silly exercise in using traditional holiday tropes as a catalyst for an ongoing story line. Sure, a better seasonal plot arc might have been preferable, but what the hell do I care? I'm just here for the Christmas.