The Last Man on Earth: Secret Santa and Silent Night (2015) 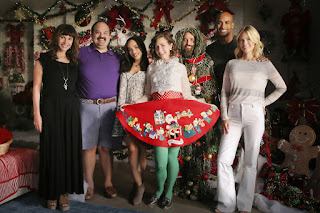 Well. That was weird.

I've seen ads for this show before, but I never actually watched an episode. Now that I have, I'm still a little unsure what to think of it.

The Last Man on Earth is a series about a small group of survivors living in the empty, desolate remains of a planet where disease has killed off the human race. Also, it's a farcical comedy.

I actually like that premise quite a bit. Protagonists in post-apocalyptic stories tend to be abnormally capable; the best of humanity. Conceptually, there's value in subverting this assumption. But maybe they pushed things a little too far with Will Forte's Tandy, who I found entirely unlikable. To be fair, I think that was the intention, but still, it might have been a bridge too far.

These two episodes were part of a much longer plot arc. The first, Secret Santa, centered on the group celebrating Christmas together with a Secret Santa gift exchange. This made for some entertaining interactions due to different characters' interpretations and levels of engagement. Some got each other major pieces of pop-cultural paraphernalia, while one basically did nothing.

The real focus, however, was on the relationship between Erica and Phil. The pair broke up prior to the episode, despite the fact Erica is pregnant. Tandy, seeking Phil's gratitude, trades Secret Santa names with him, giving Phil an opportunity to win Erica back. Tandy tries to give him "the perfect gift," as well: the Hope Diamond, but Phil instead brings Erica ultrasound equipment so she can see her child. This wins her forgiveness, though Tandy goes on thinking his idea was better. Before the episode ends, Phil doubles over in pain, seriously ill.

As a B-plot, Tandy's brother, Mike, spends the episode (and presumably the preceding years) orbiting the planet in a space station, where his only companions are a bunch of worms he's been studying. When the last of these worms dies, he puts on a spacesuit and prepares to jettison himself into space. While he's waiting for the doors to open, he looks through and discovers there's actually another worm left alive. He tries to the override the airlock, but isn't fast enough.

Silent Night picks up where Secret Santa left off. Mike catches himself on a tether and manages to drag himself back to the station. He names the worm "Phil" and begins debating whether they should risk trying to descend to Earth.

Meanwhile, the group determines that the other Phil (actually, one of the other Phils - "Tandy" is Forte's character's middle name) has appendicitis. None of them are doctors, though Gail has a bit of first aid training. Against her judgment, they pressure her into agreeing to perform the surgery. Most of the episode is devoted to her preparation. There are a few revelations along the way, as well as some complications due to a love triangle around another character.

The episode ends with Gail attempting the surgery while Mike and his pet worm climb into an pod and attempt reentry. Both go poorly and imply failure, though Wikipedia informs me Mike made it to Earth (though his long-term prognosis sounds less promising). Apparently, that was it for Phil, though.

While Secret Santa was holiday-themed through and through, Silent Night offered only lingering Christmas elements. I suspect the title was in part a fake out, implying some sort of Christmas miracle that never materializes. Ultimately, Gail was right when she insisted she wasn't qualified to perform an operation: the others were simply living a fantasy.

As a series, I find this conceptually fascinating, but I have no real desire to see more. In other words, I respect what they're doing, but I didn't really like it.
2015 Comedy Episode Erin Snyder Science Fiction