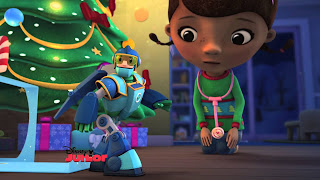 If you don't have small children or regularly shop for toys, you may be unaware of this popular show. On a moral and personal level, I think it's awesome that this show is popular. It wears its feminism and positivity on its sleeve, which is great. It's kid-friendly to a fault, though, and the songs weren't very good.

The main character, “Doc,” is a little girl who has a knack for fixing broken toys. (She is following the example of her mom, who is a doctor.)

With that premise, of course there's a Christmas episode. As someone who spent a lot of time and love fixing toys as a kid, I found this show somewhat charming, despite the simplistic writing. Erin felt less charitable toward it than I did.

The main premise of the episode is that an elf named Tobias dropped a toy he was supposed to deliver for Doc’s little brother, breaking it. He's distraught about the implications for his career, (seriously, he won’t shut up about it) and Doc and her cadre of stuffed animal friends agree to help him.

She can't fix the action figure without a specific part, so Tobias whisks them all to the North Pole to find one. After some false starts, they find the piece and fix the toy just before Santa discovers them. He admires Doc’s work, says he’s happy to have someone looking after toys after they’re given, and offers her a job if she ever wants it. She declines for now, but she gets a special elf hat for Christmas.

That’s the short version. Really though, this episode raised more questions than answers.

Some are straight-forward plot issues. Why can’t Tobias fix the toy himself, or just go back to the workshop and get another if travel is so easy? Why is a toy from Santa so crappily constructed that dropping it, while it’s in the package, will snap a crucial gear?

More are the kind of existential stuff that even Toy Story barely touched on. There’s a squeaky fish who is part of the group. In the workshop, it sees an entire room full of squeaky fish. This never comes up again - it’s just a creepy shot, like a character looking into a room full of inactive clones.

Oh, I didn’t mention the fact that Doc can talk to her toys because she has a special stethoscope. It seems to bring them to life. I don’t know if this was explained in an earlier episode, but they don’t move or speak on screen until she does her thing, so it certainly seems like she is imbuing non-living material with sentience. For fun.

Can the toys feel pain? Commander Crush seems kind of pained when he gear is busted. This whole thing isn’t completely thought through.

If you don’t mind this sort of confusion and have a child to entertain, Doc McStuffins is on Hulu.
2013 CG Episode Fantasy Lindsay