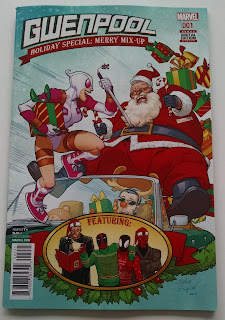 Last year’s special was fun, so I was excited when I heard there would be a sequel.

I was more excited when I opened to the table of contents and saw a story by Ryan North called “I Saw Spidey Kissing Galactus, The Bringer of Gifts.” That gives you a little taste of what you’re in for.

The book opens with the beginning of Gwenpool’s story. (Gwenpool, in case you aren’t up on your Marvel trivia, is Gwen Poole, a comic fangirl from a “real” world who is stranded in the Marvel Universe. She is basically unbeatable because she understands the fictional nature of the world.)

Gwen is getting ready to celebrate Christmas with her teammates, but they seem to be preparing for a very different holiday. One where Galactus brings presents to good children and you express your caring for others by giving and wearing hot pants. She quickly determines that something is screwy and heads off to the North Pole to get to the bottom of it.

Then you’re treated to three short stories set in this alternate holiday world. The aforementioned Spiderman tale is by far the best and the most fun, but Punisher and Fing Fan Foom clashing over Pantsgiving is weirdly interesting, and the Red Skull rediscovers the meaning of Hydra.

Then it’s back to Gwenpool for the reveal and the resolution.

There is a Halloween-themed Deadpool story tacked on after this, but I found it annoying and wish I had skipped it. (It didn’t annoy me just because the art and writing on Squirrel Girl was wrong for the current, awesome, take on the character, but that was a big part of it.) The main story was pretty great, though.
2016 Comic Lindsay