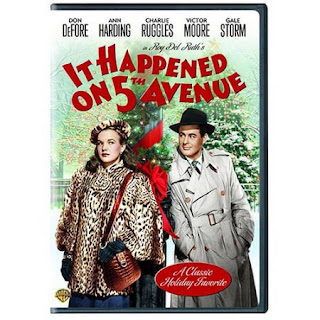 I think this movie was recommended on some list of little-known Christmas films, even though Christmas doesn’t fully show up until after the halfway point.

We open on a tour bus traveling down Fifth Avenue, with an announcer pointing out the houses of New York’s wealthiest families. A man in a shabby outfit with a dog and a cane is walking down the street. Once the bus passes, he sneaks through a loose board into a backyard and down through a manhole, coming up (somehow) inside the boarded-up mansion.

It turns out this is Aloysius McKeever, a homeless man with high class taste. He lives in this house secretly while the owner, real estate and business mogul Michael O’Connor, is in Virginia for the winter.

Meanwhile, the last tenant is being thrown out of a building scheduled to be torn down for one of O’Connor’s projects. This is Jim Bullock, a young unemployed veteran with nowhere to go. McKeever runs across him in the park and takes him back to his secret mansion. Jim thinks McKeever is a friend of O’Connor, and doesn’t fully trust him, until Trudy shows up and McKeever comes clean.

Trudy is actually O’Connor’s daughter. She’s 18, and she’s run off from finishing school because she hates it. She stops at “home” to get some things, and McKeever and Jim mistake her for another trespasser. Once she figures out what’s going on, she decides to hide her identity and play on the men’s sympathies. This was a very funny scene, as she’s very smart and knows exactly what she’s doing.

Soon she’s living “secretly” in the house as well, and she gets a job in a local music store. She and Jim run into a couple of Jim’s army buddies and their families, and they also can’t find anywhere to live. The house gains a few more boarders.

Jim and his friends get an idea for an enterprise, inspired by something McKeever says. They want to raise money from themselves and a bunch of other GIs, buy an old army camp outside the city from the government, and turn it into quality inexpensive housing.

They don’t know that O’Connor wants the same property for a shipping terminal.

O’Connor shows up in town searching for his daughter, and things take a weird turn for a bit. When Trudy meets up with him, she tells him everything, and Erin and I couldn’t figure out why. Then we realized that it’s only half the story of Jim and Trudy. It’s also both a bit of a Scrooge story and it also plays on older Christmas traditions where the poor or the young would be temporarily lifted to a position of (mock) power.

Trudy convinces her father to masquerade as a bum, and she gets him a place in the house. As the newcomer, he’s given a lot of the grunt work by McKeever: cleaning, hauling, etc. Every time O'Connor almost loses his cool, Trudy talks him down, insisting that he always got his way before. She wants her father to meet Jim, but she also wants Jim to continue to court her without knowing she has money.

Some of the humor is a bit awkward, or goes on the type of tangent you wouldn’t see in a modern movie, but it’s a fun journey to go on.

Eventually Trudy enlists her mother’s help keeping her father in line. Her parents divorced some years back, but it turns out that her father’s obsession with business was what drove them apart. Now that they’re both pretending to be poor, as they were when they first met, and they’re cooking and cleaning together, they begin to fall back in love.

The whole group of new friends celebrate Christmas in the big house together, and it’s clear that they have all become close, except maybe for O’Connor. He’s trying to get Jim to abandon Trudy by offering him a job in another country through a proxy.

The women make it very clear that they will not stand for chicanery of that sort, or any kind of dealing that puts profit above people. McKeever also speaks eloquently about the importance of friends. O’Connor finally has a change of heart and bends over backward to fix everything for Trudy without giving more of the ruse away than necessary. It isn’t quite a full “Mankind will be my business” turnaround, but at least he learned that it’s better to have friends and do good things for good people.

Jim and his friends get their project, Jim and Trudy are engaged, O’Connor and his former wife remarry, and McKeever walks off into the sunset, happy to have friends, still unaware of their real identities.

We enjoyed how this didn’t play into a lot of the obvious drama beats that a similar story would wallow in today. For example, we never see Trudy tell Jim the truth! There’s no scene where he rejects her for having money, or where she uses that to get anything. They’ll have to come clean eventually, but it’s not part of the story. The older romance between Michael and Mary O’Connor was nuanced and very welcome as well.

I don’t know that I’d say this is great cinema, but it’s charming, funny, and sweet. Apparently it was unavailable for many years, but we got the DVD through Netflix.