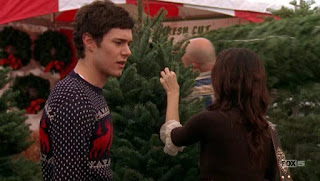 You've got to admire the audacity of a show that's willing - eager, even - to undercut a dramatic moment where one character is trying to stop another from throwing their life away in a desperate robbery attempt by cutting to a bar-mitzvah-themed fundraiser where a couple of other characters lead the room in a chorus of Deck the Halls.

This is the third Chrismukkah episode of The O.C., and even more than the second, it's crystal clear the show's dropped the pretense that it's anything other a comedy. And, once again, we're better off for that.

The premise is built around a developing story-line. Some new character who lives to surf got hit by a car in an earlier episode (those "last time" openings really help here). If he ever wants to get better, he'll need an expensive surgery he can't afford. So his friends decide to put on a fundraiser/Chrismukkah Bar-Mitzvahkkah for the not-at-all-Jewish Ryan. This will also give Seth a chance to make for his own failed bar mitzvah, which none of his friends showed up for.

There's just one problem with the plan: the surfer is too proud to accept money from rich people. Instead, he wants to rob a convenience store to get the money. To be fair, it takes them most of the episode to piece together that's what he means when he says he'll take care of it himself. By the time Ryan figures it out, he's already bailed on his own Chrismukkah Bar-Mitzvahkkah to follow the surfer and stop him mere seconds before he's about to ruin his life.

This leaves the other characters having to kill time in the banquet hall decked out with giant menorahs and other Hanukkah decorations. The two Jewish characters try singing Hanukkah and telling the story of the holiday, but that fails miserably. Hence the rousing chorus of Christmas tunes, highlighting just how gloriously offensive the whole thing is.

There's really only one thing not to like in this, and that's the moralizing. This episode (and I strongly suspect the show) has a sort of modernized "white man's burden" theme to it. The heroes are almost entirely very rich philanthropists who throw fundraisers to help the less fortunate. While it may fit the situation, having one such "less fortunate" kid tell another to stop being stubborn and accept this assistance is a tad cringe-inducing. There are complex systems of inequality that allow the wealthy to live in luxury while suppressing others. A handful of lavish fundraisers doesn't make up for this disparity - if anything, it makes even their charity feel wasteful and superficial.

But, damn. It was funny. The writers knew how offensive the concept of a Chrismukkah Bar-Mitzvahkkah was and had a lot of fun with it - that fun was seriously addictive. In addition, that scene where Christmas invaded cultural space supposedly reserved for Hanukkah served as a great symbol for how hard it is to ward off the overwhelming force of Christmas. It really was a great moment in holiday television, and it's earning this episode the first "Highly Recommended" label I've slapped onto this series's specials.
00's Comedy Episode Erin Snyder Highly Recommended