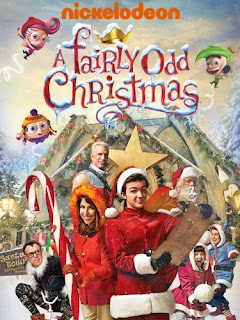 I should probably add that I've never seen the first live action movie or any of the animated series other than the aforementioned Christmas special.

This apparently opens where the previous movie left off: the now grown-up Timmy, Tootie, and the CG fairy godparents are circling the world in a magic flying van granting wishes to anyone who's sad. They give one young girl a magic unicorn, another a monster truck, they turn a boy's small toy into a giant monster and set it loose on Tokyo, and they help a bunch of robbers empty out an electronics store.

This is all in the first few minutes, mind you. It was about here that I realized I was going to like this weird-ass movie.

Before I get to the actual plot, I should provide a few words about the tone. This is a live-action movie, but it's directed and acted as if it's a cartoon. Not a realistic cartoon, either: this is a spastic, farcical comedy. Think Speed Racer without the budget. I've seen a lot of things try to capture this tone and fail, and the primary reason is that most projects don't fully commit. Conversely, the reason this (mostly) succeeds is that it completely embraces the absurdity of its premise. The characters act like they're in a Nickelodeon cartoon, and the world follows the same rules.

Back to the plot. Timmy's wish-granting has an unintended side-effect. I mean, in addition to the destruction of Tokyo and the endangering of kids' lives (which is actually brought up but never resolved). Since their wishes are already being granted, thousands of names are dropping off Santa's list at the North Pole. Claus sends a pair of his elves to summon Timmy for a talk.

After Timmy tries to help, he inadvertently injures Santa, causing him to have a mental breakdown. According to "Da Rules," Timmy has to fill in, but there's a problem: his reckless antics have landed him on the naughty list this year. This causes a paradox: he's the only one permitted to serve as Santa, but he's forbidden. So, along with his friends, he sets out on a dangerous quest to consult with Elmer the Elder Elf, who alone can remove him from the naughty list.

Along the way, they run afoul of gingerbread men, zipline over a valley of razor-sharp candy-canes, and have to cross a river of molten eggnog. Again, the writers of this thing really know how to win me over.

Of course, Timmy gets his name removed from the naughty list and saves Christmas. They actually did a pretty good job with the scene with Elmer, too - I found the resolution surprisingly satisfying.

That's not to say this was a perfect movie. Plenty of jokes failed to deliver, and the CG OddParents were fairly obnoxious throughout. But overall, I liked this quite a bit. The comedy had an edge to it that most family-friendly fare shy away from.

I certainly wouldn't claim that this transcended its limitations as a TV movie, but it was bizarre, funny, and enjoyable. You could do a lot worse.
2012 Comedy Erin Snyder Fantasy Movie