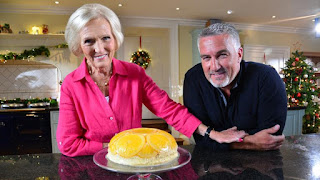 It’s an elimination-based baking competition that takes place over ten weeks. This is one of the spin-off specials that are formatted more like a cooking show. The two judges from the show, Paul Hollywood and Mary Berry, make recipes to inspire the viewer.

I’m not sure whether I was inspired to try any of these, but if nothing else, it was interesting to see some British holiday desserts. There’s no pudding here, but nearly all of the desserts involve fruit and custard and I think everything involves alcohol.

The six recipes outlined in this hour are a pavlova (meringue and custard); spiral buns containing dried and fresh fruit and jam; a fancy trifle, a turkey, ham, and leek pie; a ridiculously pretty thing made of sponge cake, pastry cream and candied orange slices; and a pandoro (Italian sweet bread/cake).

The food all looks pretty good, although many of the pieces are half-dessert, half centerpiece. The episode overall felt both long and short - each piece was short, but I sort of stopped being interested by the end.

Mary and Paul’s friendly banter is charming, although again it’s a bit much to fill an entire hour.

If you really love their dry British personalities, though, you might enjoy this longer taste.
2016 Documentary Lindsay