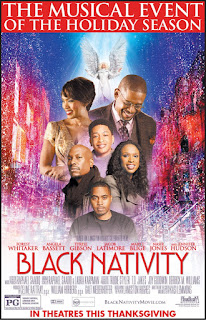 First, I would like to state for the record that about fifteen minutes into this musical movie, I started thinking that it wasn’t that it wasn’t awful, but there was a disconnect between the style of the music and the style of filmmaking that made it unconvincing and boring. But if either the music/singing were more grounded or the acting/set/cinematography more surreal, it might work. And then later in the film I was proven right when it suddenly got good.

The movie follows a young man named Langston (after the poet), when his mother sends him to her estranged parents’ home for Christmas. He’s never met his grandparents, but his mother’s jobs aren’t bringing in enough to make rent, so she ships him from Baltimore to New York.

And up to this point it’s just slow and schmaltzy, and it has that music problem I alluded to at the start. The music is full of autotune and style that doesn’t match the very realistic filming of characters walking and riding buses. The result is thereby deflated of all actual pathos, and then the plot gets stupid.

Langston, a teenager who grew up in Baltimore, gets robbed after being in Times Square for five minutes. That makes literally no sense. Then he tries to go into a hotel to use a phone, and tries to return a wallet to a guy who left it on a counter, and he gets picked up by the cops. He didn’t actually take anything, and even if the hotel thought he was trying to, they’d hopefully just run him out, not spend the time and hassle and bad PR to have him arrested.

But, whatever. Langston has to have a scene in a holding cell so he can meet an older man who teases him about being a kid, and more or less tries to scare him straight. He’ll come up later. He gets picked up by his grandfather and brought to their super-expensive looking Harlem townhouse.

This might be a good time to mention that this is a really fantastic cast. Forest Whitaker, Angela Bassett, Tyrese Gibson, Jennifer Hudson, even the guy who played Ben Ulrich in the new Daredevil is here. They all are acting and singing their hearts out, trying hard to salvage this really thin, poorly written material. It’s a shame.

Anywho, Langston learns some things about African-American pride and he tries to sell his grandfather’s most prized possession to help his mom and he angsts in a dream sequence about a young couple who lives on the street and how no one cares about the people on the fringes.

And then we actually get to the Black Nativity portion of the film. Black Nativity is a performance piece, written by Langston Hughes, that retells the nativity story with an entirely black cast. Our young Langston’s grandfather is a reverend who hosts a performance at his church, and Langston is forced to attend.

While he’s there, he falls asleep… and suddenly you have a few minutes to glimpse what an awesome experience this film could have been if they’d jettisoned the entire frame story. For fifteen minutes or so the film is kind of amazing. It’s a surreal dream sequence that plays out the nativity story, starring the young homeless couple from earlier, with Langston as observer. It uses a mix of traditional music and modern styles, a mix of vaguely period and modern costumes and theatrical urban set pieces. It culminates in a vibrant crowd dance number presided over by an angel in an awesome silver costume.

And then unfortunately we have to return to the real world and wrap up the story. Langston skips out of church when he wakes up to meet with the guy from the cell. Of course, this guy is actually Langston’s unknown father, Tyson, and Tyson apologizes for leaving him and his mother and finally talks the teen into returning to his grandparents. As they arrive, Langston’s mom Naima shows up, and there’s a reunion. The threesome troop inside the church to confront the older generation. It turns out that when Naima got pregnant as a young woman, the Reverend was so embarrassed that he offered Tyson money to skip out, which he took, because he ran with a bad crowd. Naima found out, and hadn’t spoken to her parents since. Tyson’s cleaned up his act, the grandparents are sorry, and everyone decides to forgive each other because Christmas.

And, good news! Naima and Langston can stay with their rich family for as long as they like, so all the plot is now magically resolved. Ugh. Seriously, Naima had one character trait for most of the movie: she would do anything for her son. And you expect me to believe that she wouldn’t have swallowed her pride sometime before they were evicted? It’s an extremely unsatisfying ending, not least because we never find out anything more about the fate of the homeless pregnant couple. They don’t have rich parents, so I guess they’ll die in a ditch.

Yay, Jesus? It was so frustrating to see good actors waste their time on this, and so frustrating to realize that a film of an actual performance of Black Nativity would probably be awesome. But we didn’t get that. We got this instead.