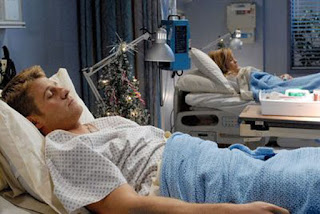 This is by the far the strangest of the Chrismukkah episodes. It starts out in a mundane enough fashion - Ryan is mourning his deceased ex-girlfriend and is having a crisis that his new relationship with Taylor is getting serious. The two of them have an argument on the roof, fall off, and wake up in an alternate universe where neither of them ever existed.

A few caveats to this. First, this isn't my interpretation: Taylor identifies it as such. Also, based on her knowledge of science-fiction, she decides they need to fix the problems of the characters in this bizzaro-verse before they can return home. Of course, everything's mixed up: Seth's parents are divorced, and his father's new wife is having an affair with Summer's fiance, who is played by a young but very recognizable Chris Pratt.

They manipulate and influence everyone with mixed results. In the episode's best scene, Seth demands Ryan tell him who he is and what's happening. Finally, Ryan just blurts out the truth as he understands it: that's he's from an alternate universe and can only return if he fixes the other characters' relationships. Seth, true to character, nods and says he always knew this would happen someday. After that, he's entirely on board.

They do help everyone in the alternate universe, but that's not actually the key to escape. Taylor needs to stand up to her mother, while Ryan needs to accept his ex is gone and let her go. Once they do that, they wake up in the hospital with only faint, lingering memories of their journey. In other words, the audience gets some verification it was all real, but they don't. They keep the growth but not the knowledge there's magic in the world.

Obviously, there's a lot of It's a Wonderful Life in this thing's DNA, but that's to be expected. There are also a handful of Oz references, and the alternate universe is of course reminiscent of Back to the Future Part 2 (which borrowed heavily from It's a Wonderful Life, so... I guess it's all connected).

The holiday elements were surprisingly tame in the mirror-verse: they were more pronounced during cuts back to the real-ish world, where other characters were having their party around the unconscious pair. But the whole "magic of the holidays" thing played pretty heavily into the premise and tone.

Overall, this was fine but not as fun to watch as the third episode (or really the second, for that matter). The points where characters acknowledged and confronted the SF elements were great, but most of the rest was kind of boring. I imagine it would be less so if you knew the characters better, but I lacked the context to really engage with the alt-Earth stuff. But it was kind of hilarious seeing young Star-Lord show up. Pratt's always fun.

Before I wrap up, I have a few things to say about the series, based on the four episodes I saw. I have to admit I completely misjudged this show from previews and commercials. I'd assumed it was shallow and bland, but - while I wouldn't describe what I watched as perfect television - it was intelligent and funny. Seth, in particular, is sort of a proto-Abed: a comical version of a nerd who's believable and interesting (take notes, Big Bang Theory - this is how it's done). This was clearly a series that took risks and was aware of its absurd aspects. In the episodes I watched, I saw quite a few points where obvious tropes were subverted.

It was, in short, much better than I'd anticipated.
00's Comedy Episode Erin Snyder Fantasy