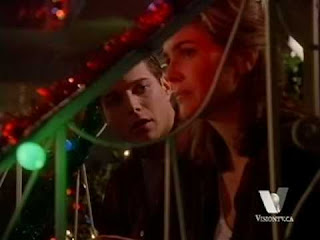 Seinfeld famously referred to itself as the show about nothing, a somewhat self-deprecating title meant to imply an absence of premise, plot, and purpose. But I've seen almost every episode of Seinfeld, and I don't ever recall seeing an episode where nothing significant happened. Actually, I'm having a hard time thinking of a single episode of any show deserving of that distinction.

Save, perhaps, this one. We just finished watching this episode from the fourth season of Party of Five, an hour-long drama from the 90's, and I'm already finding it difficult to retain shards of story in my memory. It's not that nothing happened - characters did and said stuff - but none of it felt at all meaningful or important. I can attempt to tell you some of what happened, but I can't tell you what it was about. Honestly, it didn't seem to be about anything.

There were a bunch of characters living their lives, and they experienced different events around the holidays. I want to say there were three plot-lines, but it's surprisingly difficult to focus on any of them. None really seemed to intertwine or influence each other: they just sort of happened in a vacuum. Characters had conversations, delivered speeches, and argued, usually looking almost as bored as we felt watching them. Anytime anything emotionally loaded came up, the dialogue transformed into a string of cliches about life and hardship.

The plot that came closest to being interesting revolved around a character played by Matthew Fox. I neither remember nor care what his name was, so I'm just going to refer to him as "Racer X." At any rate, Racer X has cancer, but he doesn't want to take it easy, like his doctor says. Instead, he convinces a friend to take him on a day trip to pick up some furniture. Then he hides her keys, so they have to stay at a conveniently empty bed and breakfast run by Professor Whitman from Community. He makes them a nice dinner then is surprised when they explain they need separate rooms. The next day, they pick up the furniture and go home.

Racer X feels much better about things after this. Also, they played a game at one point where they pointed out Christmas decorations.

Plot line #2 involves a nineteen-year-old dating a twenty-six-year-old mother who's going through difficult times. The teenager's friend acts like a dick at a Christmas party (also, before and after the party). But the mature nineteen year-old is helpful. Perhaps his relationship will work out after all.

The third plot line focuses on a girl meeting up with an old friend who's back from Yale for the holidays. They both lie to each other about their lives, pretending things are much better than they really are. The truth comes out, and they take some solace in each other's suffering.

I've tried to synopsize these events in as dry and straightforward a manner as possible in an attempt to recreate the flavor of the show, but I doubt I succeeded. This is akin to watching a couple people you don't know talk about watching paint dry. Besides pretending that Matthew Fox's character really was Racer X, the only points I found at all interesting were the dramatic monologues, which were occasionally trite enough to be hilarious. I laughed out loud at several of the episode's most emotional moments.

The holiday elements were mainly just present, without purpose or effect. Just like everything else.
90's Drama Episode Erin Snyder Sucks