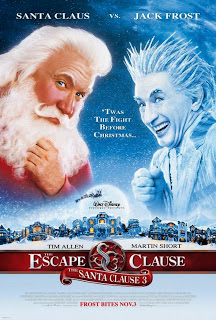 Unlike the first two installments of The Santa Clause, part three is consistent. I'm referring, of course, to the fact the others each had a solid 15 minutes that weren't entirely horrible. You may be tempted to dismiss this as a flaw, but I encourage you to look at it as a boon. At no point does this movie give you hope and wrench it away.

Besides sucking consistently, I'll say one other positive thing about The Santa Clause 3: it doesn't abandon the character of Mrs. Clause from part 2. She's still here and she's still a major part of the plot. It's a common trope to introduce a love interest then relegate her to a cameo in the next installment, so... kudos to the no-talent hacks who made this for not falling victim to that particular awful cliche.

I'm pretty sure they checked off all the others.

The movie takes place as Christmas approaches. Mrs. Clause is about to have a baby, and she's missing human companionship. Tim Allen flies her parents to the North Pole after drugging them with the help of the Sandman. There's a bizarre subplot about the elves trying to make the in-laws think they're in Canada, because of... magic or something. Oh, Santa's ex-wife comes as well, along with her husband and their young daughter.

The villain of the movie is Jack Frost, played by Martin Short. Frost is pissed that he's a minor character in the scope of legendary figures, and he manages to fast-talk his way into an internship at Santa's workshop. His actual plan is to sabotage the operation and trick Santa into invoking "the escape clause," a convenient plot device that would have rendered the first movie moot (wait - Tim Allen could have gone back in time and NOT killed the previous Santa?).

Eventually, he manipulates events to accomplish this and changes the past so he took over instead. This drops us into an alternate timeline where everything has changed. Well, not everything: the movie still sucks.

The alternate timeline could conceivably have been an interesting premise to explore, had they actually invested some effort. Frost Claus has gone public and turned The North Pole into a tourist destination: it's an absurd twist, but with a good designer, it might have been visually interesting. Instead, everything looks the same, but everyone is miserable (especially me).

Tim Allen saves the day and sets everything back to normal, the Frost gets redeemed with just about the crappiest call-back I've ever seen. The movie ends, and - after some idiotic outtakes played over the credits - I'm left praying they never make a fourth.
00's Comedy Erin Snyder Fantasy Movie Sucks