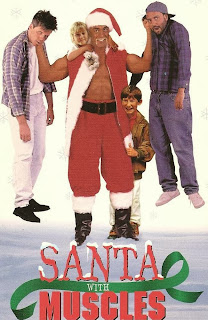 While it probably doesn't need to be said, I will state it now for the record: Santa with Muscles is not a good movie. It is - objectively - pretty bad, a vehicle for Hulk Hogan produced years after the wrestler's fame had waned. When it opened, it made $120k in its opening weekend and closed after two weeks. However, unlike 99% of zany holiday comedies, it is absolutely watchable. There are even moments when the filmmakers attempted to be funny that resulted in funny scenes. If you don't watch many movies in this genre, you'll be forgiven for not realizing how rare this is.

The movie opens with a girl writing a letter to Santa. The girl's town is being terrorized by some sort of crime lord / businessman names Ebner Frost, and she's worried that she'll lose her home at the... wait for it... orphanage.

Meanwhile, billionaire playboy, Blake Thorn (Hogan), is enjoying a life of energy drinks and impromptu kung fu matches with his gardening staff. While being chased by police, he ducks into a mall and disguises himself as Santa Claus. Naturally, he sustains a hit to the head and loses his memory.

Soon, he winds up defending the orphanage against a team of supervillians assembled by.... seriously, I'm not making this up. There's a team of evil scientists led by a psychotic doctor trying to take over the orphanage by force so Frost can get the MAGIC EXPLODING CRYSTALS IN A CAVERN UNDERNEATH THE TOWN.

Also, the cast includes a small-time grifter / mall elf played by Donna's father on That 70's Show AND an extremely young Mila Kunis as one of the three orphans.

By now, you might be wondering if you should track this down. The answer might be yes. Like anything in this ballpark, you'll want to approach it on its own terms (that means drunk), and preferably not alone. But, unlike Deck the Halls, Jingle all the Way, Eight Crazy Nights, Ernest Saves Christmas, the Santa Clause trilogy, the live-action Grinch, the Home Alones, and dozens of other movies in this genre we've sat through... this one is kind of fun to watch.
90's Action Comedy Erin Snyder So Bad It's Good