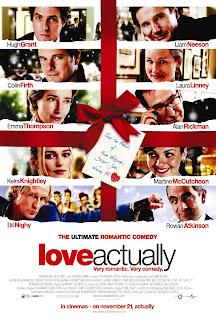 Love Actually is to romantic comedies what absinthe is to spirits. It represents the essence of a genre distilled to a point where it no longer tastes likes a romantic comedy, but even in small doses will still mess with your head.

For better and for worse, Love Actually does not come packaged in small doses.

This clocks in at around two hours and fifteen minutes. While I did enjoy the movie on this viewing, I would have thanked its editor for amputating forty-five minutes of that.

I say "this viewing," because this is the second time I saw the film. I didn't care for it much after the first, though I slid it into that rare category of movies I didn't like but thought were quite good. I was actually someone distressed to find myself enjoying it this time, as I like having a handful of movies fitting that description I can whip out in conversation.

Love Actually is about love. The theme is "love." The plot is "love." The characters are all in love. Very few have last names; some don't have first names.

The characters all have individual stories. In total, there are nine or ten sub-plots, none of which are very complicated. The stories are all ostensibly intertwined, but only in the most superficial ways. If anything, it feels like characters from different stories share the screen to conserve the limited run time and convey as much back story as possible.

Structurally, the movie is designed using a relatively simple approach: the individual story lines each establish a sort of emotional anchor. This is the same thing most movies do. The difference is, instead of leading down individual stories to wait for the payoff, this sets up several others. By the time it gets around to delivering the punchline, you feel like a lot of time has passed. If you were watching any of these pieces start to finish, they'd feel cheesy and obvious: spread apart, they come off as charming.

You can see what it's doing - there's no real mystery to the magic trick on display here - but it does it with such style, it's hard not to appreciate.

Elements of the holiday play into various subplots - the annual competition for the number one Christmas single (apparently a big deal in England) forms the backbone for one of the stories, while a Nativity Scene is used as a nexus for several others. The rest of the movie is full of holiday music, decorations, parties, and references, but none of it is especially significant. It uses the holiday's trappings to ratchet up some additional emotional resonance, but the situations feel contrived.

Love Actually is kind of a contradiction: it's a great movie, but also a missed opportunity. The structure and concept feel unique, and - thanks to some great dialogue, acting, and directing - the movie is a lot of fun. At the same time, the movie doesn't add up to anything more. There's no larger frame story, despite having a perfect setup to tell one. Likewise, there's no more depth to the theme than the opening narration suggests.

All that said, it's easier to pick apart than to dislike. And, all things considered, I'd feel remiss if I didn't award it the "highly recommended" label. After all, this is likely the high water mark for Christmas romantic comedy, so it might as well get credit.
00's Comedy Drama Dramedy Erin Snyder Highly Recommended Movie