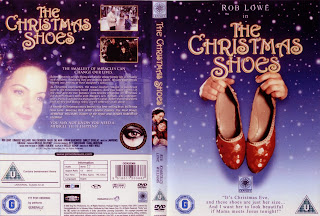 That's right: we're not done with this thing yet.

There are three extras on this DVD, and we just sat through all of them. One is the music video, which we'd already seen several times. I've got to say, having seen the movie and now having context for the clips interspersed between close ups of the creepy lead singer, the video is even more idiotic than before. Didn't think that'd be possible.

The other two are mini-documentaries; one about the writing of the song and book, and the other about the making of the movie. They're both equal parts hilarious and painful. Here are a few highlights:


The director actually compared "The Christmas Shoes" to "It's a Wonderful Life." He wasn't joking, either: he talked about how neither was afraid to explore the dark side of the subject matter, how the ending was earned.

Upon hearing the 2-sentence premise of the song, the writer immediately thought it would make a great book.

The song writer really thinks the story in the song gets to the heart of what Christmas is about.

The actors tried really hard to think of positive things to say about this project. The best Rob Lowe could come up with was that it put him in the holiday spirit.


I love extras on truly awful DVD's. I love that there's a record of people speculating on whether this will survive as a Christmas classic, and boasting about its creation.

I realize that these people made an absurd amount of money on this, but you have to wonder if someday, years from now, they'll watch these scenes and wonder if it was really worth it.
00's Drama DVD Extras Erin Snyder Religious