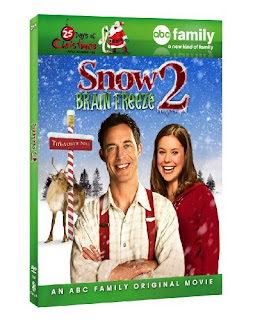 If you were reading the blog last year, it's conceivable you may remember my review of the ABC Family made-for-TV movie, Snow. But seeing as Lindsay and I barely remember it, it's not too likely.

So, let's start this out with a quick recap: Snow is a movie about Nick Snowden, the new Santa Claus. He's trying to find a lost reindeer, and on the way he meets the girl of his dreams, Sandy. They rescue the reindeer from Sandy's ex-boyfriend and get married. Also, the first movie was essentially a worthless pile of crap.

I want you to pay special attention to the "pile of crap" part. That's going to come up again.

Snow 2: Brain Freeze takes place the next year. Snowden and Sandy are having difficulties, mainly due to him being a jackass. He teleports to the city to get some time away, hits his head, and promptly gets amnesia. One commercial break later, and he's in the hospital with a convenient news crew there to broadcast his condition over the air.

The show is improbably seen by both Buck (the villain from part one) and Sandy, who is apparently watching that particular local news station from the North Pole. Buck reaches him first, convinces him he's an old friend, then sneaks him out of the hospital, hands him a train ticket, and tries to get him to leave the country.

A point of clarity: Buck knows that Nick owns at least one flying reindeer, but doesn't know this has anything to do with Santa Claus. You may be trying to wrap your head around how the character can be that inhumanly stupid. Let me assure you, EVERY character in this thing is that dumb.

For example, Sandy reaches the hospital, finds out Nick's vanished, then immediately runs into Buck. She then accepts his offer of help to try and track down Nick and never suspects he orchestrated the encounter. Despite this, Nick and Sandy are soon together, but Nick is still missing his memory. She can't simply explain that he's Santa Claus and teleport him to the North Pole to prove it, because... some guy who fell out of a book assured her this would destroy Christmas for some reason.

Forty minutes later, she tells him anyway. Fortunately for her, in the meantime the writers forgot there were supposed to be consequences. By this point Buck has stolen her magic teleporting snow and is collecting magical artifacts from the North Pole. He shows up to kidnap Sandy, which convinces Nick he's really Santa. He fixes everything by believing in himself, and the thing mercifully ends.

Jesus, this was bad.

Look. When you sit down to watch a sequel to something as idiotic as Snow, you don't expect greatness or goodness or even mediocrity. You expect something that's about as bad as the original. There is no reason anyone shouldn't have been able to deliver that. If you found someone who actually had amnesia, handed them a camcorder and two hundred bucks, they'd almost certainly deliver a product that kicks Snow 2's ass.

I mean, come on. The bar was so low here, you've got Christmas elves filing workers' comp claims because they keep tripping over it. This wasn't hard to clear: all you had to do was not instruct every actor to spend every other second on screen grinning like a moron.

Did this thing even have a director? If not, it seriously needed one. If so... it would have been better off without.