The Colgate Comedy Hour: The Abbott and Costello Christmas Show (1952) 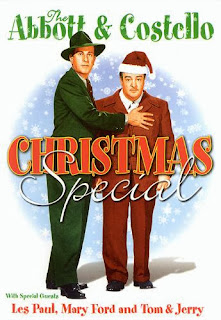 Depending on whether you believe the DVD cover or the episode, this is either called "The Abbott and Costello Christmas Special" or "The Colgate Comedy Hour." Personally, I think Colgate should have ponied up the cash to endorse the DVD release, so the titles matched.

In fact, while we're on the subject, I think it's time we brought back giving TV shows directly over to corporate sponsors and letting them fill an hour every week with whatever they think will get the most viewers. Think about it: Google could dump some serious cash into an hour long drama.

Regardless of what you call this, it was an hour-long comedy variety show. There were dancers, acrobats, and comedy. The dancing and acrobatics aged a bit better than the comedy, though that's almost a compliment. Time turns good routines into old ones, after all.

Abbott and Costello were clearly talented, and they did an impressive job selling some bizarre holiday-inspired scenarios. They played heavily with the fourth wall and layered jokes around the blurry line separating the actors from the characters. One skit even went so far as to pretend to end the series, with Costello thanking the cast and crew and mourning the end of the show. This wasn't even the last skit of the episode - that was a hammed-up version of White Christmas, which concluded with a massive brawl where the orchestra started beating each other with their instruments.

The other acts varied, but by and large were impressive. There were some talented dancers, as well as a pair of acrobats who were extremely good. Beside nostalgia, there's not a lot here that would hold modern audiences' attentions, but the level of skill on display is obvious.

Then there were the commercials, all geared toward products released by the Colgate/Palmolive company. Toothpaste, shaving cream, soap, and laundry detergent were all shilled shamelessly. They even tried to sell $1 aftershave as the perfect Christmas present "that will please all men".

If anyone's looking for a present for me, I don't want aftershave. Even the kind with a simulated-gold cap.

The ads were hilarious in hindsight. They lacked even the glimmer of subtlety modern ads have and made claims that were almost certainly fabricated (I sincerely doubt doctors actually proved Palmolive makes skin look better than all other soaps).

Overall, I found this more fascinating than enjoyable. I've had a similar reaction to several shows from this era. A lot of these feel less like entertainment and more like artifacts. I certainly wasn't around when television shows were presented by corporate sponsors who plastered their name across the title and integrated their ads into the episode. I grew up seeing things parody that format, but until we started this blog, I don't recall seeing any of the originals.

Shows like this are great for what they are, which is a cheap substitute for a ticket into a time-machine (plus the odds you'll screw up the space-time continuum are virtually non-existent). That said, this is of more interest to academics than most people. By now, I suspect you know whether this is something worth tracking down.
50's Comedy Episode Erin Snyder Variety