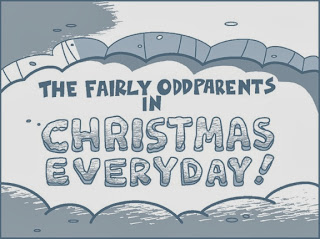 This is the first and only episode of The Fairly OddParents I've seen. The premise of the series is that the main character has a pair of fairy god-parents who grant his wishes, leading to mayhem. I have a hard time imagining how the producers have been able to wring nine seasons out of this premise, but I have to admit I found this special inventive and fun.

The episode starts right before Christmas, Timmy's favorite day of the year. There's some generic toon chaos involving his babysitter (apparently, she was the regular villain at this point, so they shoehorned her into the episode), followed by Christmas itself. At the end of the day, Timmy makes the classic wish: for every day to be Christmas.

The next few minutes are pretty predictable: the quality of each successive Christmas diminishes, and the world grows more and more irritated at the now seemingly eternal holiday. It takes Timmy a while to catch on, and by that time things are really bad. The military's out to get Santa, the world economy is tanking, his father can't get eggnog... you know how it is.

Once he realized the damage he's caused, he attempts to reverse the wish, only to discover that's not an option. By this point, the special has been mixed: there's been some good humor, but everything's been relatively straightforward. That's when a busload of other holiday icons show up, led by a mafioso version of the Easter Bunny. They're pissed that their holidays are on hiatus, and they're planning to solve the problem by taking out Claus.

The episode shifts into a race to the North Pole, with Timmy trying to warn Santa before the holidays banish him from Earth. The resolution is surprisingly effective. The solution feels like an extension of the setting's rules, rather than simple deus ex machina.

I can't speak for the series, but I enjoyed this episode quite a bit. It's definitely worth your time. There's also a Fairly OddParents Christmas movie out there: we'll add that to our list and let you know if it's anywhere near as good.
00's Comedy Erin Snyder Fantasy Highly Recommended Special