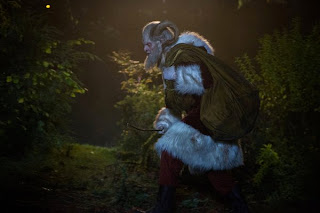 We had never seen an episode of Grimm before this. From this viewing, it’s… okay.

The monster of this week is Krampus, which we were excited to see. While the visual design is very nice, the plot is sort of blah.

The episode opens with a couple of punk kids stealing presents, then Krampus sneaks up on them under a bridge. He snags one, but the other is just injured and hides in a car. Cut to the next morning, when the cops are investigating a dead kid. Only the kid isn’t dead. He’s really, obviously, not dead. This is the point where we started to really doubt the professionalism of the emergency responders on this show.

Main dude and black sidekick talk to the kid and figure out that he’s scared of Santa, so they go looking for monsters in Santa suits. They find one, but he’s not the one stealing kids.

There’s a couple of side plots interspersed through this. One is about whatever the season plot arc is, and this is mostly dudes being dramatic in Vienna. You know it’s Vienna because every time they cut to this plot the word VIENNA comes up on the screen in big letters. You know it’s dramatic because of the really obvious music choices. It’s something about clans of supernaturals fighting or something, I didn’t really understand.

The second sub-plot is about the show’s Giles and his girlfriend. Schlubby-not-Giles surprises his lady with a crazy Christmas display. She has sadface because she used to love Christmas, but then she had a tragic Christmas once in her childhood. I did not have the sympathy for this that the show intended me to have. The display was stupidly over-the-top, her reaction was unreasonable, his reaction was unreasonable. This whole side plot was nothing but tedious.

Anywho, back in the main plot, the star and the sidekick come to see schlubby-not-Giles and he explains about Krampus, and how the kids were stolen and beaten for being ‘naughty’ but are probably still okay if they can find them by that night. Or else Krampus will eat them.

Okay, so of course the main characters win, and the climactic sequence is okay, but then the denouement is dumb as they try to fit Krampus into the mechanic of how monsters work in this world. Going by this example, it’s weirdly boring and overly rational for a show about monsters. It couldn’t just be magic.

I don’t want to talk about the fact that this was doubled up on Hulu with a NON-CHRISTMAS episode about really annoying snake-men that we sat through. The two episodes didn’t even have anything to do with each other. That’s dirty pool.

While this wasn’t a horrible piece of television, I can’t really recommend this episode. However, as I alluded at the top, if you are already invested in this show, I’m sure it’s a very different experience.
2013 Action Episode Fantasy Horror Lindsay