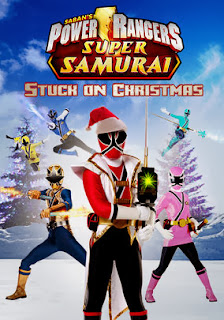 There are other Power Rangers Christmas episodes, but this is the one that Erin found on Netflix. It’s a humdinger.

I knew something was drastically wrong after the Rangers defeated a monster in the first 5 minutes of the episode. Then their giant robot loses power and it becomes an excuse for a really crummy clip show.

You can have no idea how terrible this was. The acting was beyond ridiculous. The ‘comic relief’ was horrible, and the action/drama was hilarious. There is tons of terrible, extraneous Christmas-pun flavored banter. Only it’s not banter when you’re just yelling ‘quips’ (using that term extremely loosely) at a red-and-green monster. Yes, the monster is red-and-green, and has what looks like a giant ear around one shoulder and a mouth on the other. I laughed a lot and very loudly while watching this episode, but it was not at anything that the creators intended to be funny. 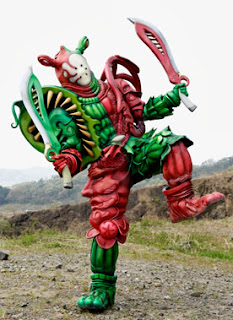 The kids say over and over how sad they are to be trapped in their giant robot on Christmas Eve. They recap plot bits we’d never heard of. However, we could follow everything, because the plots were extremely thin and the exposition was laid on so thick. “Hey, what do you want to wear for Christmas? Remember that time we went to the mall and you bought that dress?” *Flashback* “I’m sure you can fix the robot, you come up with lots of great ideas! Remember that time you fixed that thing that needed to be fixed?” *Flashback* “Hey, maybe particularly slow three-year-olds missed that we’re the comic relief, remember the time we got stuck up a tree?” *Flashback* You probably think I’m joking with that last one, don’t you. You poor optimistic fool.

Moving on, there’s a lot more plugging things into other things to activate powers than I remember from early Power Rangers. I guess the toys got more complicated, and based on these attacks, I bet they shoot foam disks. The combination of CG, suitmation, explosions with no provenance and rather over the top ‘martial arts’ is silly as ever, but it’s the awful dialogue that really makes this something special. That and the terrible ‘acting’ in those costumes.

Being curious, I looked up the Samurai Sentai Shinkenger episode that the fighting scenes are from (because yep, that’s still how they make this show). It’s called Act 15: The Imposter and Real Deal’s Arrest.

And hey! That thing that the Green Ranger did that came out of nowhere and looked dumb? That was the plot of the original episode, him learning to catch swords and the red-and-green guy disguising himself as Green Ranger to make him look like an idiot in front of the others. Huh. It is fairly amusing - by turns light and superly over-dramatic, but the young Japanese actors act much more like people who actually give a shit about something other than themselves than the American cast.

Also, all that insipid business in the cockpit with the over acting was only filmed with the American cast. I thought, since we never see their faces, that it was from the original and maybe there would be some better dialogue that would make it make sense, but nope! That set was built for the American version.

Avoid Power Rangers Super Samurai. You can watch Samurai Sentai Shinkenger if you like that tone (you know the tone, it’s a particularly Japanese blend of light-action-fantasy). But while it’s no surprise, the original has nothing to do with Christmas.
2012 Action Comedy Episode Fantasy Lindsay Science Fiction Sucks Superhero