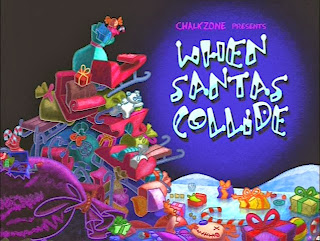 This was the last episode on the "Nick Picks Holiday" DVD we picked up. Overall, that DVD was one of the better compilations of its kind we've seen. But maybe they should have shoved this in the middle as padding instead of leaving it for last.

This wasn't really bad, but it certainly wasn't good, either. The premise of the show, is a kid has a piece of magic chalk (or something) that lets him travel to the "ChalkZone," a pocket dimension inhabited by everything kids draw.

The premise actually had promise: in the right hands, it could conceivably have turned into something cool. These were clearly not the right hands. The setting is utterly vapid, as are the characters. Both the real world and "ChalkZone" inhabitants are idiotic and cloying.

This special Christmas episode takes up the whole half hour block (usually, the time is broken into segments). There are two plots occurring simultaneously: one in the real world and the other in ChalkZone (fun fact: a small part of me dies every time I have to type that word).

The real world plot concerns the main kid's family Christmas dinner. His dad is stressed, because his Santa suit hasn't arrived, and the kid is irritated because he doesn't think he's getting the present he wanted. They get into a fight, and the kid runs off to his room (and then to... ugh... ChalkZone).

Once he gets to ChalkZone, he finds they're getting ready for Christmas too. There are eight Santas preparing to take off, and... there's a control tower, some soda, a gizmo they need to control the Santas, and... I'm not going to try and unravel this. Suffice to say, he screws things up then fixes them in time to save both Christmases.

None of it is particularly memorable, funny, or endearing. It's not overly painful to sit through, but it doesn't offer any payoff for doing so.