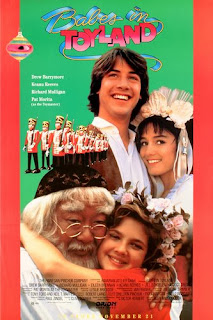 Hey, did you guys know there's a tipline on the right of the page you can use to email us suggestions of things we should watch? Yeah, we didn't, either. Well, one of our readers found it and convinced us to try something she loved when she was young. Thanks for the suggestion, Loquin. And, uh... sorry in advance for the damage to your childhood memories.

This is the 1986, made-for-TV re-imagining of Babes in Toyland, starring Drew Barrymore, Keanu Reeves, and Pat Morita. It is bad. Astonishingly bad, in fact. But, between the iconic statuses its leads would go on to achieve and the utter lack of talent behind the camera, it's kind of hilarious.

The producers must not have believed in the source material, which has been heavily modified. To their credit, the premise of Babes in Toyland is utter crap. However, the logical reaction would be not to adapt it, rather than trying to shoehorn in the frame story from The Wizard of Oz.

Drew Barrymore, 11 in 1986, is essentially playing Dorothy. First, we're introduced to her family, friends, and a cruel toy store owner who sexually harasses her older sister. Also, it's Christmas Eve, there's a storm, and a whole bunch of other stuff is going on that serves no purpose other than to introduce a bunch of characters who will be double-cast in Toyland.

Drew falls out of a moving truck, slides down a hill, then hits her head. She's on a sled at the time, and she sort of drops into Toyland and crash lands into a cake. And no, I'm not going to explain that any better. Though I will add everyone was singing a song about Cincinnati before she fell. I mention this because it's vitally important later on.

Toyland is made up of a small number of uninspired sets. The actors are wearing costumes about on par with what you'd see if you Googled "Easter Bunny costumes."

From here, the story morphs into a more familiar form. There's a woman about to marry an absurdly evil villain, despite the fact she's really in love with Keanu Reeves. You know, the plot we all sort of remember from the version made in '61. Drew Barrymore interrupts the wedding, which earns her the enmity of the bad guy. He leaves and takes his two goblins with him.

Oh, did I forget to mention there are goblins? The villain also has a weird bird-monster and an army of trolls, but those don't come up until later. He kind of dresses like a very low-rent knock-off of Jareth from Labyrinth. Oh, didn't that come out in 1986, too? What a remarkable coincidence!

At this point, it's really just the Jareth rip-off and two goblins standing between the people of Toyland and a joyous existence. Did I mention the goblins aren't armed? They don't seem particularly strong, fast, or intelligent, either, nor does their master. So my real question is why haven't the citizens of Toyland risen up and killed this jackass? There are rocks on the ground, people: this isn't rocket science.

I know what you're thinking: it would be wrong to use violence. Well, I have a few thoughts on that subject. First of all, screw that hippy bullshit. Second, this thing's ending in war, anyway, so why drag this out? Besides, there's no real authority they need to be concerned with: Toyland is a self-governing city-state, so there's no one to press charges. The Toymaster might be disturbed, but he's powerless at this point.

The real problem, as I see it, is that the people of Toyland don't seem to be familiar with the concept of violence. Even the villain seems to be faking it - he clearly wants to be violent, but there's little indication he knows how. I'm pretty sure it wasn't intentional, but this actually forms the backbone for the entire movie.

It's like Drew Barrymore has been summoned to Toyland to teach the nursery rhyme characters how to use violence to solve their problems. Keep in mind, this is more than a decade before she was in Charlie's Angels.

There are really just two more pieces of the plot we need to address: the Toymaster and the jar containing most of that world's evil. The Toymaster, played by Pat Morita, is the old, wise ruler of Toy Land. And when I say "ruler", I'm exaggerating. He's really more of a figurehead until the end, when he has the villain executed horribly.

But look at that - I'm getting ahead of myself.

The Toymaster has collected a bunch of evil and locked it in a cabinet. The bad guy naturally steals this, so he can use it to make his army of trolls unbeatable. First, he tries to use it on the main characters to turn them into monsters. It almost works, but is countered by Drew Barrymore's song about Cincinnati. You see, it turns out that the evil of the world is no match for the power of Cincinnati.

No, I'm serious. That's pretty much how it was explained.

The protagonists go to get the Toymaster's help. Meanwhile, the army of trolls, enhanced by the green evil gas, invade. The Toymaster explains that all he has are toys, and toys are powerless if anyone disbelieves in them. Since Drew Barrymore never got to experience childhood (I'm assuming because she was a child star - they didn't really explain this part), there's nothing the Toymaster can do. Drew Barrymore has a musical number in which she converts to a personal faith in toys, which allows the Toymaster's ARMY OF HUMAN-SIZED TOY SOLDIERS to function.

Did I mention the army is armed to the teeth?

The battle doesn't take long, presumably because the soldiers have guns and cannons, while the trolls are entirely unarmed and don't seem to know how to fight. Apparently, the elixir of evil released by the villain just makes things more evil, which isn't particularly useful on its own. Really, you want "evil and strength" or "evil and speed" or "evil and invulnerability". Just evil on its own doesn't make an army more powerful; it just makes them more likely to prolong your death when they inevitably turn on you.

Again, I'm getting ahead of myself.

I'm not really sure why the good guys needed the toy soldiers at all. Couldn't they just have grabbed their guns and slaughtered the troll army? The soldiers didn't even seem to hit the trolls: they just kind of blew up the ground and scared them off. I'm pretty sure the main characters could have grabbed the guns and taken out the slow-moving trolls.

Regardless, the trolls were forced out the town. One of the protagonists I didn't mention beat up the goblins and tossed them out, and Keanu slugged the villain. As far as I can tell, the theme of the movie was that you must truly embrace the joy of childhood, then realize that violence is the only solution and beat the crap out of your enemies.

So, the battle is won, and the villain is defeated. He's defiant at first, but then his tone changes when the Toymaster passes judgement: he's to be banished from the town forever. At this point, it's important to note that the army of trolls is just outside the gate, and they're pissed about this whole thing. Drew just shouted to them and told them that the villain is responsible for this debacle, and they seemed to listen.

Drew Barrymore, age 11, has turned the trolls on their master. I want you to keep that in mind.

The villain pleads for his life, saying he's lost control of the trolls. But the Toymaster orders him thrown out, and the toy soldiers do as commanded. The trolls grab him and pull him into their midst. His screams are drowned out by the cheers of the townsfolk.

With Toyland saved, Keanu Reeves marries his girlfriend, and Pat Morita reveals he's actually Santa Claus. He takes Drew Barrymore on his sleigh, and she wakes up at home. She tries to explain her experiences, but no one believes her ramblings.

What's interesting is there's no reason they should. The only validation she gets is seeing a toy soldier move at the end, and given her current state, it seems likely she's hallucinating that. Really, you can interpret the entire movie as a story where a girl falls out of a truck and suffers brain damage. In fact, that's essentially the only logical way you can interpret it.
80's Comedy Erin Snyder Fantasy Movie Musical So Bad It's Good