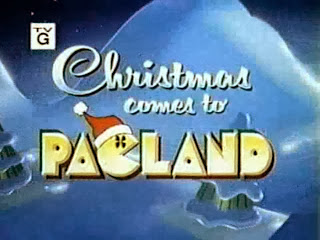 Back in 1982, there was an animated series based on Pac-Man. You might think there's not enough material to justify an entire series, but I can assure you that's a faulty opinion: there wasn't even enough to fill a single episode.

The episode begins with Pac-Man and family going out for a sleigh ride. It's Christmas Eve, but they have no idea since no one in PacLand has heard of the holiday. They run into some ghost monsters, which they drive back with snowballs before eating power-pellets and "chomping" them.

I should add that "chomping" is a very popular activity in PacLand. The ghost monsters (I'm not sure why they're "ghost monsters" instead of "ghosts," but the show seems adamant) are obsessed with "chomping" Pac-Man. More on this later.

Between getting chomped and putting on new ghost outfits, the floating ghost-eyes run into Santa Claus and inadvertently spook his reindeer and cause him to crash. By far the best moment of the special is a direct result of this. Santa's sleigh is buried in the snow, his deer are impossibly mangled, and Claus starts whipping the reins in a futile attempt to get them moving.

Lindsay and I almost fell over laughing. At that moment, we were ready to award this a "so bad it's good" designation. But sadly, it was not meant to be. For some reason, the special dragged on and went from hilariously awful to just plain awful.

Soon, Santa and the deer are sitting in the Pac's home teaching everyone about Christmas while Pac-Man goes looking for Santa's sack of gifts. He runs into the ghosts, and this time there are no power pellets to save his ass.

This time, he gets CHOMPED.

And it turns out, that's not a huge deal. The ghost monsters chomp him quickly then take off. He gets up and heads towards home. Sure, he's hurt, but considering he gets disintegrated in the video game, I'd say he gets off pretty easy here.

By now, it's too late to save Christmas... until Pac-Man the brilliant idea to get Santa's reindeer hopped up on power-pellets. I was really hoping they'd drop dead from radiation poisoning, but no such luck. Instead, he flies off and everyone learns the true meaning of Christmas, even the stupid ghosts (and, no, it's nowhere near as cool as that time Skeletor learned the meaning of Christmas).

You can find a copy of this thing on Youtube, but don't waste your time. If you want Christmas to come to PacLand, just drink a quart of eggnog and play the stupid video game.
80's Comedy Erin Snyder Fantasy Special Sucks