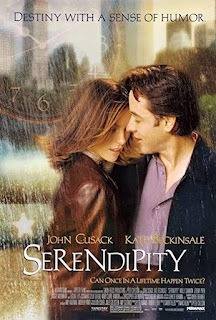 We struggled with whether it was worth reviewing this or not. It's one of those cases where a movie skirts the border of our already loose requirements for consideration in the pantheon of holiday films. I think it technically qualifies under our most subjective rule (i.e.: Christmas plays a pivotal role in a key scene), but just barely. Back when we reviewed Sleepless in Seattle, I assumed that would be about as fringe of a case as we'd put on the blog, but this is even more questionable. Ultimately, we're mainly letting it squeak through the cracks because regardless of whether I think it's a Christmas movie, the film's editors were pretty specific: this opens and closes with Christmas music.
The premise centers on a pair of destined lovers played by John Cusack (Jonathan) and Kate Beckinsale (Sara) who share a meet-cute while shopping for a gift intended for their current romantic partners. They immediately hit it off and go on a sort of impromptu date. It's clear they're a good match, and Jonathan is eager to see where there this goes, but Sara is hesitant, mainly because she believes destiny is a guiding force in the universe that should be obeyed at all costs. They set up a few destiny quests - he writes his name and number on the back of a $5 bill, and she promises to put her name and contact info in a copy of Love in the Time of Cholera and sell it to a used book store - before they're separated by a kid in a devil costume.
The movie then jumps ahead three years to reveal Sara has moved to San Francisco, Jonathan is still in New York, both are engaged to other people, and both are still pining over the person who slipped through their fingers. As wedding dates move closer, they become more and more obsessed with at least finding out who each other was.
This of course spirals into parallel searches as each of them tries to locate the other, with the help of their best friends. There are a set of near-misses as they almost bump into each other, but the closer they come to actually tracking each other down, the further they grow apart - at one point, Jonathan actually manages to find her home address, flies across the country, and drives to her house... all the while unaware she was actually in the hotel his wedding is supposed to take place.
Both the $5 bill and the copy of Love in the Time of Cholera show up, reinforcing each of their beliefs in fate, even as they struggle to interpret its meaning. They call off their weddings without finding each other, then find each other anyway. The movie then jumps ahead to Christmas to mirror the opening.
Christmas is used both to symbolize the passage of time and to imply the presence of some sort of divine or supernatural presence. The movie is about destiny, and Christmas serves as an obvious manifestation of that force.
As far as romcoms go, this thing is... it's fine, I guess. The comedy is relatively light, but what's there is mostly solid. The leads do a decent enough job selling the idea they're compelled to follow through on an objectively insane quest, and the side characters are mostly fun.
The flaws are numerous and obvious, but they're mostly par for the course in this genre. The leads are horrible to their romantic partners, neither of whom deserve to be lied to. Some jokes age poorly (there's a bit where Sara and her best friend are mistaken for a couple that made me cringe). And then there's the whole destiny thing. The book and $5 bill just kind of magic their way back into the characters' hands, which feels more like deus ex machina than fate.

Look, I think it's acceptable to have either a romantic comedy's theme or plot be as simple as "destiny did it," but having that be more or less the entirety of both in the same movie is obnoxiously simplistic.
If you love this genre or these actors, you'll probably have fun with this. Otherwise, it's a generic, uninteresting example of why the vast majority of romantic comedies are boring exercises in formulaic storytelling. If you'd rather experience a movie that breaks these conventions and manages to tell a compelling romantic story that not only refuses to rely on destiny as a crutch but actually succeeds in portraying a world where choices drive the narrative, you'll have to look elsewhere.
00's Comedy Erin Snyder Movie