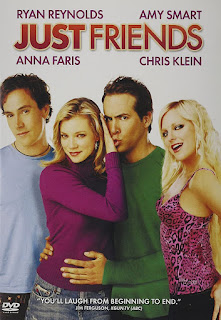 Just Friends is one of several Christmas comedies from the first decade of the millennia that's been largely forgotten, and in this case, it's not hard to understand why. The premise is largely built around the concept of the "friend zone", a somewhat misogynistic idea popularized in the mid-'90s that - for reasons that continue to elude me - someone thought would make a good basis for a movie a decade later.

The story centers on Chris, played by Ryan Reynolds, who grew up in New Jersey, where he was humiliated in high school due to being overweight. His best friend was Jamie, a girl he secretly pined over for years. I should note the movie opens with an extended sequence set during this time that involves Reynolds in a fat suit. We'll come back to this.

Jump ahead to Christmas ten years later. Chris has lost weight, he has a high-paying job as a record producer in LA, and his love life is a series of dates with models. But of course, he still pines for Jamie, because otherwise we wouldn't have a movie.

It's worth noting he's also a horrible, shallow person. Just scum. Doesn't care about others, doesn't treat women with respect, and is prone to violent outbursts. To be fair, violence is a fairly common occurrence in general in this movie, but Chris has an unusually short fuse.

At any rate, back in LA he's pressured into reconnecting with Samantha, a singer Chris briefly dated who's even more prone to violence than he is. Samantha is coming out with a new album, and Chris's boss wants to ensure she signs with their label. Chris and Samantha take a private jet towards Paris but have to stop in New Jersey after Samantha accidentally starts a fire on the plane.

With no better options, Chris brings Samantha to his mother's house. They stop in a local bar, where he finds Jamie, kicking off... more or less what you'd expect given that premise. The bulk of the movie is Chris trying to hook up with Jamie to put his past behind him. Time and time again, hijinks ensue, and Chris ends up embarrassed, injured, or frustrated. Eventually, he realizes he likes Jamie as both a friend and a love interest, and he doesn't sleep with her when the opportunity arises because he worries about how that would impact their friendship.

There's also a rival in the form of another guy who was also stuck in the "friend zone" with Jamie in high school. And Samantha just gets more and more unhinged and erratic as the movie goes, eventually destroying Jamie's family's massive Christmas display.

At the end of the movie, Chris and Jamie fight verbally, then he flies to LA and fights with Samantha physically, then flies back and reconciles with Jamie, because I'm pretty sure these things are contractually obligated to end with the male lead ending up with the woman he selected.

If it feels like I'm being unusually brief, you're not wrong - the movie has a lot more going on in terms of detail, it's just... none of it really matters. This thing has very little internal consistency.

The most extreme example of this is the scene where Samantha, convinced Jamie is sleeping with "her man," drives to Jamie's parents' house and - in front of everyone - destroys thousands of dollars worth of decorations while Chris (who is definitely responsible for the misunderstanding) watches awkwardly. The next time he and Jamie are together, she doesn't care about any of that and suddenly wants to spend the night with him for some reason. They briefly reference the prior scene, but the sequence of events makes no logical sense.

Same goes for a lot of this movie. Characters watch each other do completely absurd, stupid, cruel things, then never bring them up. There's a sequence where Chris - as an adult - plays hockey with a bunch of kids and violently assaults them. Jamie is mortified as it's happening, but it doesn't seem to affect her decisions later in the movie.

This brings us to one of the movie's more conventional problems: the motivation for the women is always either nonsensical or unhinged. Samantha's goals and desires are pretty clear, but she's portrayed as comically violent and self-obsessed. They throw in some slut-shaming, as well, because of course they do.

Meanwhile Jamie just wants to be a school teacher, to get married, and settle down. But the particulars of who she wants to be with are tethered to the script's need to offer her to Chris as a reward for growing as a person.

Which brings us to problem number two: said growth is both unconvincing, unearned, and fails to connect thematically with the movie's central theme, the concept of the "friend zone." Yes, the friend zone is far more than a throwaway joke here: it's at the core of Chris's motivation and ideology. And while his motivation arguably matures, it's not clear his ideology does. If this movie actually wanted to resolve its premise, it would have needed to end with Chris realizing he wasn't ready for a serious romantic relationship and instead embrace Jamie as a friend. Instead it handwaves the whole thing by having him "grow" into wanting to have kids with Jamie. That's the ending to a different movie.

On one hand, this is kind of academic: this movie is a comedy that focuses on the parts rather than the whole. But failing to address the disturbing nature of the movie's premise doesn't just mean it's morally disappointing - it also sacrifices the film's one possible path towards redemption.

Tonally, Just Friends is already closer to a satire than a romantic comedy. As I've said several times, Chris isn't a likeable protagonist: it wouldn't be that much of a stretch to interpret his portrayal as an inherent condemnation of his worldview. Only to deliver on that, the movie had to follow through, which in this case would have ruled out the generic romantic ending. By not doing so, the movie is effectively pointless.

On to problem number three. Actually, this is more like problems three through four or five or something. I refer to the movie's incredibly dated humor. And by "dated humor" I mean sexism, body shaming, homophobia... you get the idea. I think I've explained the sexism sufficiently, so let's move on to the body shaming, which mainly consists of jokes about Chris's weight.

There's a way these could have been presented sympathetically. At the start of the movie, Chris is a nice kid, and people are cruel to him. But even here it feels like we're supposed to take enjoyment from his suffering. Doing this with Reynolds in a fat suit makes the situation ten times worse - we're supposed to be in on the joke that we're seeing a conventionally attractive adult actor made up to look overweight and mocked - that's the takeaway. If they'd cast a teenage actor and treated him respectfully, this might have come across as more than a cheap joke, but they wanted laughs.

I mentioned homophobia, as well. As was typical for comedies from this era, there are a number of sequences where characters insult each other by calling each other "gay" or other similar slurs. Also typical is leaving open room for plausible deniability by contextualizing those slurs as juvenile and dumb. This movie is ambiguous as to whether the punchline is the surface-level joke or the idea the character is saying something that stupid.

South Park has been doing this since the '90s. If it was ever clever, it's not anymore.

On some level, I understand the appeal of shock humor. There are times I find it funny. But here's the thing: it never ages well. Over time, the subtext is lost, and you're just left with the offensive surface meaning. And that's fair, because the surface joke was at least half the point. They want audiences to chuckle at a character whispering "homo" - the fact they're self-aware enough to try and excuse it doesn't really make it better.

Same goes for the constant violence. Chris and his brother fight, Chris fights with his rivals, and he fights with Samantha. Physical abuse is a running joke in this movie. Juvenile, toxic male behavior lies at the core of this, and if it's trying to satirize that, it doesn't pull it off.

For all of that, there are things to respect here. The visual humor is well done, particularly when Samantha destroys the Christmas display (I'm half convinced they set this at Christmas solely to justify this sequence - the movie doesn't do much else with the holidays).

This is also generally well directed, shot, and acted. Reynolds in particular is great at this stuff: his delivery is fantastic. I also thought Anna Farris did good work as Samantha. Is any of that enough to recommend this in spite of its problematic aspects?

Oh, hell no. It's not even enough to forgive the conventionally unfunny stuff, let alone the offensive garbage stuffed into this. This thing was forgotten for a reason.