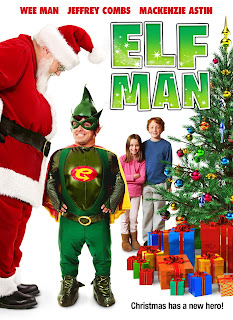 I was genuinely shocked when the end credits for Elf-Man rolled and revealed a full cast worked on the picture. With the exception of a few decent shots and a couple actors who deserved better, this thing looked and felt less like a "real" movie than... God, I'm struggling to find some point of comparison. Some of it felt like the low-budget direct-to-video production it was, but it was rare for the movie to hit even that mark. More often it felt like a cheap sitcom, and even those sequences accounted for fifty percent or less. Most of the rest felt like a college project. At times, I'd have believed a handful of high schoolers were somehow calling the shots.

Now that we've got that out of the way, let's talk about the premise of Elf-Man, a 2012 fantasy/superhero/comedy serving as a vehicle for Jason Acuña, here credited as "Wee Man." The story centers around two kids and their father, an inventor whose wife died a few years before. On Christmas Eve, the father finally perfects his invention, a computer chip that generates enough electricity to power a house (don't bother asking; the movie provides no answers). While going out to pick up the Christmas ham (and invite a woman he likes to dinner), he's kidnapped by three thieves, who know about the chip somehow (again, no explanation).

The kids don't realize where their dad went, so they make a wish on an old elf doll (think Elf on the Shelf but somehow creepier) for their family to be together and happy again. Soon after, Santa visits and "accidentally" forgets the elf he brought along to catch reindeer feces in a stocking so it doesn't land on roofs (I wish I was making that up, but I promise you, I am not).

After a series of generic misunderstandings, the kids - along with their grandmother - realize the elf is real, and the elf realizes the wish they made on the elf doll means... you get the idea. He's got to rescue their dad before Santa returns to pick him up. Also around this time, the woman from the butcher shop shows up, and for extremely flimsy and poorly explained reasons everyone tries to keep her from leaving and prevent her from learning the dad's missing or that there's a Christmas elf in the house. The ruse falls apart after one of the kidnappers breaks in and the elf scares him off. After that, she's just part of the team.

The elf tries to rescue the scientist, but the bad guys figure out what he is in time to stop him. He snowboards back to the house and mopes on the roof. The kids, deducing he needs to believe in his inner power, decide to call him "Elf-Man" and make him a superhero suit, which he eventually puts on. By then, the scientist gets free and makes his way home, but the criminals are fast on his heels.

Elf-Man stands his ground, but the villains brought mistletoe, which acts like kryptonite to elves. They take the chip and leave Elf-Man writhing on the floor with mistletoe on top of him. Pulling it off him doesn't negate the effects, but the kids once again deduce the solution: they get their dad and the woman he invited to kiss beneath the mistletoe to reverse its effects, which not only stops poisoning Elf-Man but also gives him actual superpowers. Sure. Why the hell not.

Cue the generic third act fight in which Elf-Man (aided by the kids) defeats the bad guys and recovers the chip. This leads into an even more generic farewell sequence where we're suddenly supposed to believe the characters have developed emotional attachments to each other despite the fact the movie spent most of the previous hour showing us the opposite.

The movie's merits are few and far between. I mentioned earlier a few shots briefly crossed over to watchability. Nothing exceptional, but it's important to note the rare instances of mediocrity stood out in contrast to the default of absolute garbage. In the interest of being complete, I actually liked a visual gag where a Christmas wreath rolled across the screen like a tumbleweed.

Aside from that two-second gag, the film's best asset is the primary antagonist, played by Jeffrey Combs. I thought a few of the other actors were decent, as well - the scientist and the other two villains did about as good a job as you could have asked for, and the grandmother was fine - but Combs was the real standout. He's got a hell of a voice and a lot of presence, which is a hell of a lot more than I can say about anything else in this mess.

And that's about it, in terms of positives. Despite the fact the movie appears to have been made for Jason Acuña, he is absolutely awful in the lead. I don't just mean he "doesn't work in the role," either - Acuña displays virtually no ability to act, whatsoever. It feels like he's relying on his fame as one of the stars of Jackass to carry the film - he's clearly playing the character as a version of an existing persona, rather than a unique role, and said persona doesn't seem capable of acting. Maybe that's intentional, or maybe he's just out of his element. Either way, it is painful to watch.

He's not alone, either. The kids are... look, I'm sure it's not their fault, and I am sincerely sorry if either of them ever read this somehow, but they were really, truly not ready for this kind of thing. Their lines are delivered with the range and sincerity of a mediocre 4th-grade school play. We're talking "kids from Full House" levels of bad here, and that goes for more than just them. The aforementioned love interest isn't any better, and we already covered Acuña.

But astonishingly none of them are the worst part. No, that honor falls to the script, which is just... it's absolutely astonishing it ever got filmed. Not just because it isn't funny, and not just because it fails to deliver even a shred of believable emotion... all that's true, but the real flaw is how mangled and misguided the tone is.

This is, of course, a kid's movie - I assume that was obvious from the premise and synopsis, to say nothing of the leaps in logic. But it's also a vehicle for an actor from Jackass, and it kind of embraces that fact. The movie doesn't appear to have him actually doing any absurd stunts or anything, but it does seem to allude to that sort of thing. And while it doesn't overtly cross any lines in terms of content, it seems to delight in moving up to them in ways that are unpleasant to watch. I don't mean unpleasant in a subversive or shocking sense - it's just really a chore to sit through.

I'm not familiar enough with Jackass to state this for certain, but it felt like the movie was peppering homages to the franchise. If so, that probably wasn't a great idea in something otherwise going for the feel of a G-rated movie.

I could go on. The direction and editing are barely better than the writing. The pacing is so bad, it feels like it was made by people who'd never actually seen a movie before. It is virtually indescribably bad to a point I almost want to tell you to watch this just so you'll understand. But I won't, because I don't hate you.

You do not need to see this. No one needs to see it. I do not understand how or why anyone could have made this and unleashed it on the public, let alone on children.