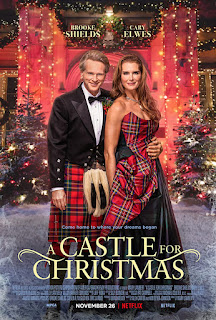 So you're here. That probably means one of the following things is true:

If you're in the final category, I should warn you that, unlike Erin, I didn't...hate...this one.

Now, that doesn't mean it wasn't bad. Because it was. It was badly written, bizarrely shot (although we postulated while watching that some of that may have been pandemic-related), and overall mediocre.

You already know if you're the kind of person who likes these movies. If painfully obvious tropes don't give you stress headaches, and you don't give a fig for linguistic or cultural accuracy as long as there are two reasonably charming characters and a happily ever after, then you've probably already seen it.

I, myself, am softer on romance and rom-coms than I used to be, and I liked this one on much the same level that I enjoyed the movie Mamma Mia: This movie is pretty dumb, and sometimes I'm laughing at the parts that aren't supposed to be funny, but the people making it look like they're having such a good time that I end up enjoying myself.

Brooke Shields plays famous author Sophie Brown who killed off her main character's love interest in her most recent book. Her fans are pissed and vocal about it. After having a ranting meltdown on a talk show, she decides to take a vacation to Scotland, to a town where her father lived as a kid.

She is immediately recognized, but these fans are with her, and soon she has a group of knitting besties. (Incidentally, we never really learn anything else about her books or why she chose to write out that character, despite some early allegations that it has something to do with her recent divorce.)

She goes to visit the "castle" (as many online have pointed out, actually a manor house) from her father's stories, and runs afoul of Myles, the "groundskeeper." (His real identity as the duke who owns said castle is not a surprise for anyone who can recognize a lead actor or a trope from a mile away.)

After a shouty confrontation (to be fair, she snuck into an off-limits part of the house), she returns to the town hotel/pub to commiserate with her new friends, only to learn that the castle is for sale because of (blah, blah financial decline-of-the-aristocracy stuff).

Cut to the duke begrudgingly agreeing to meet with a prospective buyer and another shouting match when the buyer is (of course) Sophie. He eventually comes around if she'll agree to a long transition period where they'll both live in the house, ostensibly so she can learn how to take care of it, but really so he can try to trick her into leaving but keep her deposit. The actual handover is set for Christmas.

Cue a few shenanigans and a date-like sequence in which obnoxious behavior on both sides softens into banter. However, the movie mostly skips any real relationship-building, choosing to substitute soft indie music, misplaced montages, and occasional third-party exposition (Sophie loves her daughter! Myles does great things for the community!) for any actual sequences of character growth. Meanwhile, Sophie is trying and failing to start her next book, inspired by a family legend Myles told her.

Soon enough we jump ahead to Christmas. A big community party is being planned in the castle and everyone's excited. (It's implied that Sophie and friends did all the set-up, but that's one of many situations in this movie that don't make sense - you don't buy a big fancy house like that and not hire a staff. How much money she has seems to vary wildly depending on the needs of the plot.) Sophie and the duke are friendly now, and kinda flirty, but nothing more.

Sophie's agent sees her interest and recommends she pursue the duke to help her image. Myles' friend sees his interest and tries to convince him to stop pushing everyone away.

Sophie finds a part-tartan dress in the castle and Myles catches her trying it on and for a second I think they're actually going to acknowledge that she shouldn't be wearing a tartan that doesn't belong to her family. But no, instead he admits that he has feelings for her and they sleep together.

The next day is the day of the party and everything seems great until they have a big fight about the house (Sophie thinks she's reaching out; Myles feels patronized and is afraid of losing his home.) Sophie storms off and declares that she's headed back to New York, but the weather and a taxi breakdown keep her in town. Myles shows up on a horse to apologize for snapping at her and they go to the party together. Myles has also secretly arranged for Sophie's daughter to attend the party.

They get together and share a morning kiss, conveniently papering over their obvious emotional baggage. Sophie comes up with a (bad, cliche) opening to her new book. The end!

Okay, so none of the plot holds up to more than a bit of thought. But, of the Christmas romance films I've been unfortunate enough to sit through, I don't think it was among the worst.