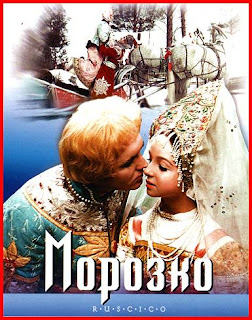 Like a lot of foreign movies we look at, Morozko has a few titles it's been released under in the US. "Jack Frost" appears to be the most common - that's the name from its 1966 release and from when it appeared on Mystery Science Theater 3000. It's also sometimes called "Father Frost." I don't think either are horrible, though I'll be sticking with the Russian title, Morozko.

First, it's worth noting this is more accurately described as an alternative to a Christmas film. The title character (who doesn't appear until after the halfway point) is one of many midwinter mythological figures loosely tied to Santa Claus. The movie itself is based on a folktale, though it's been expanded and made a bit more kid-friendly.

The folktale is pretty simple: two stepsisters live together, with the mother spoiling her bratty biological kid and abusing the other, despite the fact she works hard and never complains. Eventually, the (step)mother makes her husband abandon the good one in the forest in winter, leaving her for dead. Instead, Morozko finds her. She's polite to Father Frost, so her rewards her with a bunch of stuff and eventually returns home. The mother tries the same trick with her other daughter, but this one isn't polite to Father Frost, so he leaves her to die. The good kid gets married, the bad kid gets buried - you get the idea.

The movie more or less includes that story - though the impolite sister is humiliated instead of killed - in the midst of a significantly more complicated story about the polite girl, Nastya, and the guy she's destined to be with, Ivan, who I'm guessing is drawn from other Russian folktales.

The movie opens with a tone-setting sequence where Nastya is desperately trying to finish her chores before the rooster crows, since she'll otherwise be severely punished. She pleads with the rooster, but he tells her she'd need to ask the dawn. So she politely asks the dawn, and the sun dips back beneath the horizon. This is all presented fairly straightforwardly, without forced humor or irony.

We're also quickly introduced to Ivan, a young man from a different village setting out on his own. He's a self-obsessed braggart, albeit one who seems to be good at everything. On the road, he's surrounded by thieves. He makes no effort to stop them from taking his food, but while they're eating, he throws their clubs so high in the air they vanish from view. When asked, he cheerfully tells them they'll fall back down next winter.

Next, he encounters a short old wizard with a mushroom hat who vanishes and reappears. After a short game of chase, the wizard gives him a bow and arrows, then chastises Ivan for not thanking him. Ivan mocks the old guy, remarking a bear may bow his head, but he won't.

Ivan comes to a magic cave next, sees a message that if he throws a feather into the wind it will lead him to his destiny, and shoots a bird out the air. The birds he sees are animated - not sure why they couldn't get a live-action flock, but it looks kind of neat and fits the tone of the movie. The feather leads him to Nastya. He's smitten and immediately proposed, but she turns him down because of his boasting. He tries to prove himself by shooting a nearby bear with his newfound bow and arrow, but she covers his head with a basket to save the bear's life. When Ivan pulls the basket off, his head has transformed into a bear's.

He blames her for the transformation and runs off, eventually finding the wizard, who tells him the bear head is because of his own selfish motives. Ivan interprets this to mean the curse will be broken as soon as he performs a good deed, so he runs off to find someone to assist, scaring everyone he comes across in the process (side note - this sequence was pretty hilarious).

After searching for a while, he finds an old blind woman and helps by carrying her and her belongings. This doesn't lift the curse, so he runs off. In the woods he comes across what he believes is her walking stick. Bothered by the idea she'll be unable to get around without it, he decides to take it to her, despite no longer thinking it will help him. This of course demonstrates a change in character rather than in behavior, so his head finally returns to normal.

This is about the halfway point in the movie, and we jump ahead to winter and this starts resembling the story it's based on. Nastya is banished to the woods, where she encounters Morozko as he uses his magic staff to put frost on trees. He's impressed with Nastya's kind nature, so he gives her his cloak and brings her to his castle to warm up. We're also warned about his staff - anything touching it turns to ice, as an unlucky bird discovers the hard way.

Meanwhile, Ivan is searching for Nastya when he comes across Baba Yaga, a witch from Russian folklore who lives in a house that walks on chicken legs (and yes, that's in the movie). He asks for her help, but she refuses, then eventually uses her magic to animate a bunch of trees. She tries to cook Ivan, but he outsmarts her in a comical exchange and tricks her into getting into the oven. He eventually frees her in exchange for agreeing to help, a promise she breaks about ten seconds after he's gone.

Baba Yaga sends her cat after Nastya in retaliation, and the animal reaches Morozko's castle before Ivan. Morozko himself is out, though he forgot his staff, so the cat tricks Nastya into touching it and turning to ice. This gets resolved pretty quickly when Ivan shows up: his love melts the ice or something, and they're free to get married, complete with a generous gift of gemstones and horse-drawn sleigh.

First, Baba Yaga takes another shot at vengeance, this time hiring the thieves from the start of the movie. This fails for a couple reasons, the most obvious being we're due for those clubs thrown into the air in act one to fall back down on the thieves' heads. Ivan also reprimands Baba Yaga and sends her running off.

Nothing's left but a return to the village and a brief sequence where the jealous stepmother tries to duplicate Nastya's success with her other daughter. Morozko sends her home in a tiny sled pulled by pigs. Better than freezing to death, I guess.

Nastya and Ivan are of course married, and everything ends happily ever after. You know the drill.

Trying to rate or even discuss this in terms of quality is tricky, because it's absolutely a product of its age and budget. This clearly didn't have a lot of money behind it, and that shows in what's on screen. That being said, the movie is fairly innovative in using simple tricks and inspired props to sell its fantasy elements. For example, Morozko frosting the trees is obviously accomplished by having someone off-camera shake snow off small trees, then the footage is played backwards. And Baba Yaga's walking house is clearly just a costume, but it's one hell of a costume. The end experience is at times reminiscent of watching a play that makes effective use of its assets: this is about telling a story, not convincing you that what's on the screen is "real."

At the risk of overselling this, I found the approach similar to The Storyteller, though obviously the production values in Storyteller are lightyears ahead.

This also benefits from a good soundtrack that compliments the tone. In a lot of ways, it feels like you're watching a live-action fairytale in the vein of animated Disney classics, which is more than I can say for the tone of any of the recent Disney live-action remakes.

Before I get too complimentary, I want to stress this is still extremely dated visually. For every sequence I was enamored with an effect there was another I was snickering (the bear head, for example, just looks like a Halloween mask).

The other caveat is less about the movie itself and more about the version I happened to see. For whatever reason, the audio track was a few seconds off (for the record, I watched this on a legal streaming service). This is less of an issue when the movie's subtitled, but it's still distracting. I bring this up, because there's a decent chance you'll have the same issue.

Actually, I'm not even sure which audio track I was listening to. There are a few official versions, and the original isn't universally agreed to be the best.

I found this fascinating to watch. As I mentioned at the start, Father Frost and Santa Claus are sort of cousins in a family encompassing numerous similar figures. While there are no shortage of movies made about Kris Kringle, the rest of them are almost always ignored. It's genuinely delightful to watch a movie exploring another of these characters. And, despite its limitations, I was impressed overall.

Not quite impressed enough to recommend it unconditionally. This is the kind of thing worth seeing if and only if you're really interested in movies about folklore, or if Russian cinema fascinates you. Otherwise, you'll probably find the minimalist effects and unapologetic embrace of fairytale conventions off-putting.