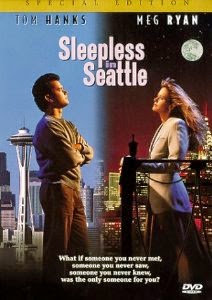 This shows up on several lists of Christmas movies, but I think that's a stretch. Several key scenes take place at Christmas, but they're all at the beginning and don't amount to more than fifteen or twenty minutes of the total run time. Most of the movie revolves around Valentine's Day. That said, there's enough holiday cheer to warrant some feedback from Mainlining, so here we are.

After a quick prologue taking place a year and a half beforehand, the movie opens with a Christmas dinner with Meg Ryan's character's family where she announces her engagement to Bill Pullman's character. The scene features some foreshadowing that her relationship won't work (just in case you missed the fact Tom Hanks is headlining). I'd add that all the foreshadowing revolves around shockingly superficial issues. We're talking things like food allergies and a dull story on how they met: there's nothing wrong with this guy, Ryan just doesn't find him "magical."

In case it wasn't obvious, this isn't the best movie to turn to for relationship advice.


Once the Christmas party's over, Ryan drives across town to another party. Her and Pullman take different cars for contrived symbolic and even more contrived plot reasons. On the way, she listens to a radio station, which ties into the other half of the movie's plot. Tom Hanks's character recently lost his wife. His son calls up a radio psychologist and says he's worried about his father, who's quickly pulled onto the line.

Meg Ryan's character immediately falls in love, because of magic.

Remarkably, the movie isn't all bad. In fact, it's almost exactly half bad. Tom Hanks's character is believable and sympathetic as someone dealing with grief and trying to hold his life together. It's the stuff about Ryan's character that's horribly twisted.

Seriously twisted. At one point, she hires a private investigator to spy on Tom Hanks. Keep in mind, this is before she's even met him. Also, she really does seem to love Pullman's character. Ultimately, she leaves him because their narrative isn't romantic enough. What the hell kind of message is that?

The Christmas elements are used for tonal juxtaposition. The characters are in dark and conflicted places, and this is contrasted with the decorations and holiday music. Basically, the same reason Lethal Weapon is set at Christmas. Only the villains in Lethal Weapon have nothing on Meg Ryan's character in this movie. And even she comes off as human in comparison to Tom Hanks's kid, who's sadistic, selfish, and manipulative.

It sets out to be a quirky love story, but winds up a hair's breath from a horror movie. I can't help but think Pullman's character was the lucky one.
90's Comedy Erin Snyder Movie Valentine's Day