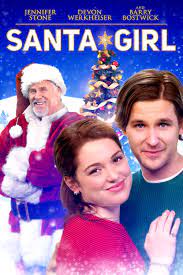 A minute or two into Santa Girl, I remarked to Lindsay that I'd seen student films with better production values. Ten minutes later, we paused the movie to check whether it actually was a student film. The answer is somehow both no and yes.

Santa Girl was produced through a partnership with Shenandoah University. I'm still a little unclear on the specifics, but Shenandoah boasts the majority of the cast and crew are students. It shows!

I was honestly a little surprised to learn the movie wasn't written or directed by students, too.

Let's talk plot. The story is centered on Cassie Claus, daughter of Santa, reimagined as a calculating, business-oriented yuletide CEO. Cassie is betrothed to the son of Jack Frost, because the house of Santa requires their patronage in order to...

Wait. Is this going for a corporate thing or a medieval royalty vibe? Both! Probably should have picked one, because the mixture comes off as incoherent.

Regardless, Cassie isn't happy about having to marry some guy she's never met, but she understands the importance of her father's work, which is a little confusing because his portrayal at the start of the movie conveys absolutely nothing endearing about the holidays. Despite her impending marriage, she applies to and is accepted to college. She convinces her father to let her attend for a semester, on the condition she returns that Christmas Eve to marry Jack Frost, Jr. He also sends her personal servant elf, Pep, who...

Oh, God. Let's talk about Pep and the elves.

The elves here come off as some sort of blend of slaves and indentured servants. It's not entirely clear what their deal is, but Pep seems genuinely afraid of Santa. The vibe is more "boss from hell" than "he will literally kill me if I fail him," but at one point she jokes that Santa might kill her, and I'm only mostly sure it's a joke. So, Cassie goes to college with what appears to be an underage servant as a roommate. She doesn't want Pep there, and she generally mistreats her. Yeah, there's a mini-redemptive arc to this, and they end up friends, but it's still off-putting to have the movie's lead behaving badly to a servant beneath her physically and economically. And mostly everything with Pep and the other elves is played for laughs.

Side note. Has it been long enough for elements of the movie Elf to be considered fair game? The movie does the "elves only eat candy and sugar thing" from Elf, and I can't tell if it's supposed to be an homage, or if they're just stealing the idea.

Cassie's father drops her off at college, gives her a wad of cash, and warns her never to use her powers because people fear what they don't understand. He makes it clear this is important, so keep this moment in mind.

Moving on. It's not long before Cassie runs into a cute rich boy named JR who immediately becomes her friend. They go to the bookstore together, and she meets another boy named Sam, who can't afford the books he needs due to an issue with his financial aid. She gives him the $500 he needs, and he promises to pay her back.

Within a scene or two, the movie confirms that JR is secretly Jack Frost, Jr., and he's been sent by his father to trick Cassie into falling in love with him to guarantee the marriage occurs as planned and their empires are united. Sam's presence becomes a complication, so Jack Frost hires Sam to spy on Cassie. Sam takes the job to pay back Cassie, but he naturally falls in love with her.

Cassie blissfully goes through the semester interested in Sam and occasionally JR, while dreading the moment she'll have to return to the North Pole to marry Jack Frost, Jr. Eventually, she tells Sam who she really is, and he refuses to believe her, despite the fact he's met an old man whose presence invokes snow AND Cassie's roommate literally has elf ears. Seriously. Giant, pointed elf ears. No one brings it up. Not once. She doesn't even try to hide them.

Sam tells Jack Frost what Cassie told him, and Frost realizes this information would embarrass Cassie. He uploads a video mocking her and Pep for thinking they're from the North Pole, and it instantly goes viral somehow. Everyone at school laughs at her for thinking she's magic (at least a few of them have seen her use magic, but this doesn't seem to come up). Cassie blames Sam, who tells her about the strange old man who hired him. This naturally makes Cassie angrier, since it means Sam's been spying on her, and she tells him she doesn't want to be friends.

The movie moves ahead to a school dance right before Christmas. Cassie is going with JR, despite still having feelings for Sam. Pep and Sam talk and realize the man behind the video is Jack Frost. Sam goes to tell Cassie at the dance just as JR is revealing his true identity to her. This escalates into a fistfight between JR, a tall, pale, almost vampiric boy, and Sam, a poor, scruffy...

Oh. Oh, My God. This is Twilight fanfic, isn't it? Okay, maybe that's a bit of a stretch, but this is definitely a paranormal teen romance in the vein of Twilight, and honestly... I liked the movie way more as soon as I realized that.

Cassie uses her magic to break up the fight in the middle of the dance. Remember when Santa warned Cassie never to use her powers in public? Yeah, well, apparently the writers didn't, because it's not an issue at all. There are a few dozen onlookers, at least one of whom is recording, and no one brings it up. It's just not significant.

Despite realizing JR lied to her, Cassie agrees to go through with the wedding, because of how important it is to her father and Christmas. If she doesn't marry JR according to the contract, we're suddenly informed, Santa's workshop will become the property of Jack Frost.

She goes back to the North Pole for a second third act. Her father realizes she isn't happy with JR, so on Christmas Eve he picks up Sam and asks him to find a loophole in the contract on their way to the North Pole.

Oh, yeah. Sam's studying prelaw. I guess I should have mentioned that.

Unsurprisingly, there's a clause in there about the parties remaining honest, which Frost broke, nullifying the agreement. JR's as relieved as Cassie - he likes her fine, but he wasn't ready to get married, either. This leaves Cassie free to plan to return to college and date Sam.

So... how is this? It's not good, but at the same time, it's fascinating and utterly unique. I mean, this is a Santa-themed paranormal romance: bad or not, I can't bring myself to hate it. And there are good things about this. The lead actress, Jennifer Stone, is really good in the role. Most of the leads do decent work, but she was a definite standout. (Quick side note: while the majority of minor characters are college students, my understanding is the leads are all professional actors.)

Having the movie crewed by college students is a bit odd. You end up with some sequences where shots or elements are better than you'd expect from a low-budget production and others with utterly baffling errors (like, the lighting is just completely wrong or something). On the whole, the movie has at least as many issues as your average made-for-TV Christmas flick, but the issues are different than you'd normally encounter. This feels like a movie made on another planet: it's bizarre.

And that makes it even more interesting. Not at all good, but weird. I'm tempted to slap a "so bad it's good" label on this, but that feels wrong somehow. The movie is pretty bad, but that's not why it's worth considering. It's that weirdness again. And, as one of the characters in the movie states, "there's a significant lack of weird in the world." So right you are, Jacob analog. So right you are.