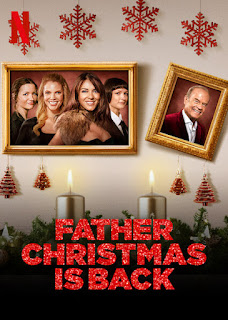 I'll admit I haven't tried particularly hard, but a cursory glance provides very little insight into how "Father Christmas is Back," a new British comedy purchased and released by Netflix, actually came to be. The short blurb on Wikipedia only includes vague filming dates - September through November of last year. While that certainly doesn't answer the question, combined with elements in the movie itself - its limited locations, small cast, and the slapdash story - I can't help but wonder if this was sort of thrown together at the last minute. I certainly can't say for certain this was a movie made without a finished script, but I can assure you it absolutely, unequivocally left me with that impression.

I assume it goes without saying I didn't like this one.

The premise centers on a family with the surname "Christmas" (really), whose patriarch, James Christmas, (played by Kelsey Grammer) abruptly walked out on them decades beforehand on Christmas, leaving his four daughters to be raised by their mother, who's also aided by James's brother, John (played by John Cleese). Somewhat unusually, none of this is shown in flashback - it's just provided in dialogue. I wouldn't be surprised if that was a workaround due to the pandemic.

At any rate, none of these people are really the main character (though Grammer gets a lot of screen time). The movie mostly follows Catherine, played by Nathalie Cox (who I've never heard of, but - for reasons we'll get to later - that's not entirely a bad thing). Catherine Christmas-Hope is the oldest of the four Christmas daughters, who... who.... I'm sorry. We need to address this.

Catherine married a guy named Peter Hope and hyphenated her last name to "Christmas-Hope." I honestly can't tell you whether the movie thinks that's clever and funny, but I can tell you with absolute certainty it is neither. Cutesy Christmas names are a cliché at the best of times, and I honestly think "Christmas-Hope" is the absolute worst example I've ever seen.

Catherine is the only one of her four sisters with a family of her own, though that will sort of change by the end of the movie. She's also hosting Christmas at her husband's gigantic mansion/castle. Did I mention all these people are supposed to be ridiculously wealthy? It doesn't really come up, nor does it add anything to the movie, but for whatever reason this is set in a massive home that would have made it difficult to sympathize with the characters if there weren't a dozen other factors rendering the point moot.

Which brings me to the first of many, many, many problems. These people suck.

The movie is trying to sell its characters are quirky and fun, but doesn't pull it off. None of them read as believable, making it impossible to relate with them, and with one possible exception, I found their idiosyncrasies cloying rather than endearing or funny. The exception, incidentally, is the sister obsessed with writing a dissertation. This still wasn't funny, but it came closest to actually being engaging.

The rest of them ranged from embarrassing to despicable. Catherine, to her credit, fell on the "embarrassing" end of the spectrum, while her sister Joanna (Elizabeth Hurley) came across as borderline sociopathic. That wouldn't have been an issue if the movie had developed or acknowledged this, but instead it just kind of shrugs it off, expects us to like her, and assures us she'll make a good mother (the hell she will - she's a narcissist).

I'm getting ahead of myself. Like I said a few paragraphs back, Catherine's family is hosting Christmas for her three sisters. Catherine's obsessed with delivering a perfect Christmas, complete with perfect decorations, food, and activities. So of course there's no shortage of jokes built around things going wrong.

Her mother and uncle John are around, as well - I'm a little confused by the living arrangements, but I think her mother lives with Catherine, while John lives nearby. Also her mother is sleeping with John. I guess that's relevant (it certainly will be later).

Catherine's youngest sister secretly invited their father, who shows up out of the blue with a girlfriend younger than his daughters. This would have upended everything, except everything was already upended - none of the sisters got along, anyway. The bulk of the movie consists of the sisters sniping at each other or their repentant father while doing various Christmas-related activities, one of which involves Kelsey Grammer dressing as Santa/Father Christmas. I liked this better the first time.

James also proposes to his new girlfriend, who's ecstatic to be marrying a man twice her age. The fact he proposes in front of his daughters who hate him for abandoning them as kids doesn't really get addressed much.

Around this point in the movie, Lindsay and I made a bet as to what the third act twist would be. She thought it was going to be a reveal where we learn the reason James left was his wife was having an affair, and I thought we were going to learn he was dying. The stakes were the loser would write the review, so here we are.

Turns out John was secretly the father of the youngest daughter, Vicky (played by Talulah Riley, who married and divorced Elon Musk twice), which is why James left. This reveal caused everyone to warm up to James, while at the same time being relatively unfazed by the discovery their mother and uncle had been lying to them their whole lives. None of it really explained why James left the continent and had no direct involvement with his kids' lives, either, but the movie just kind of glosses over this. To be fair, it glosses over a lot.

This reveal also connects with the other third-act twist. Catherine's husband, Peter, discovers a pregnancy test (Joanna's) in their private bathroom the night after he and Catherine sleep together for the first time in eighteen months. He instantly concludes she's been having an affair and that she slept with him to cover it up, and he storms out without taking the time to verify any of that. He does provide just enough information to a few of the other characters to piece this together in his absence.

James goes after him while Catherine takes their kids to their Nativity play. With very little effort, James manages to convince Peter to come back, and everything is instantly fine. The movie concludes soon after, with everyone liking each other now. Sure. Why not?

Again, this one is bad. Movies like these try to balance comedy with heart - the best of them deliver both, while passable fare manages one or the other. This fails completely on both counts: it's neither funny nor touching. It just kind of hits like cow shit falling on the floor, an image you will literally be presented with if you choose to watch this film.

Every aspect of the script is awful, too. At several occasions, the movie drops significant details right before they're relevant, rather than setting them up in advance. The most obvious example of this is Joanna's pregnancy: unless I missed something, I don't believe this came up prior to a weird sequence where she snuck into her sister's bathroom (don't ask). This should really have been established in the first act, and it's only one of many examples.

The humor leans heavily on sexual innuendo and, well, just sex. This wouldn't be bad if the jokes were funny, but - again - they aren't. More often than not, the movie expects you to find the mention or acknowledgment of people having sex as humorous. There are an astonishing number of jokes hinging on the idea of old people having sex being funny. And in keeping with tradition when one or more characters is named "Christmas," this steals the cringe-worthy joke from the last line of The World is Not Enough. Really.

As a weird aside, this is a strange assortment of actors, a number of which are pretty awful people. Two of the movie's biggest names are Brexit supporters (John Cleese and Elizabeth Hurley) and another defended Trump (Kelsey Grammer). It's actually kind of odd to see this many actors with conservative views in a movie together, particularly one with a cast this small. I'm not sure if this was a case where everyone involved knew each other, or if no one intelligent was willing to sign on to a garbage movie filming in the middle of a pandemic.

Despite not caring for him as a human being, I actually do like Grammer as an actor, and I think he does as good a job here as could reasonably be expected. He delivers his lines with depth and sincerity, not that it accomplishes anything. The dialogue just doesn't add up to believable or interesting characters, so he might as well be reading a phone book.

I assume the Christmas elements are fairly self-evident. We're doing a variation on the "dysfunctional family coming together for the holidays" thing. As is customary, Christmas serves as a catalyst for everyone to come together. Insert generic observation about winter solstice and renewal here - you know the drill.

The "Father Christmas" pun is weird. I'm still astonished they included it. The movie doesn't really do much with it, either. Obviously, there's the whole Kelsey Grammer-in-a-Santa-suit sequence. And there's a moment at the end when the sisters are referred to as "The Christmas Sisters" at a bar, as if they're local celebrities or something.

This isn't worth your time. I'm not certain what compelled anyone to make this (aside from money, I suppose). The themes are fumbled, the story is virtually non-existent, and the characters aren't interesting or likeable. It's less a movie than an empty void where a movie should be. Skip it and watch something better or at least something more memorable.