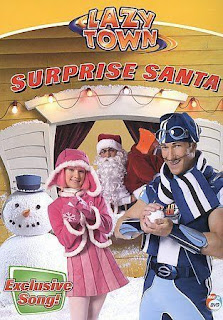 These days, we watch almost everything on streaming services, but early in the life of this site, we frequently picked up holiday-themed DVDs from clearance bins. That's how we ended up with a few of the more unusual selections we're planning to cover this year.

Prior to watching these episodes, I was only vaguely aware of the existence of this show and I knew nothing about it. My first impression after a few minutes was confusion that it didn't seem to be dubbed. There's something hard to define about the writing, some mix of absurdism and quirky word rhythm, plus physical comedy that feels a little like commedia dell'arte pantomime, that immediately said to me "not made in the U.S."

Sure enough, LazyTown is an Icelandic production. It was intended to combat childhood obesity, although very little in the two holiday episodes we watched is directly about that. There are three characters played by humans: Stephanie, a young chipper audience stand-in, Robbie Rotten, an extremely stereotypical villain, and Sportacus, a sports-themed superhero who is always flipping in to rescue the townspeople from random danger. The other characters, a couple adults and a bunch of (possibly parent-less?) children, are all elaborate puppets.

The puppetry is impressive. The sets are elaborate and extremely stylized. Both Robbie and Sportacus wear complex makeup that makes them appear equally stylized. The whole vibe is that of a cartoon somehow filmed in live-action. According to Wikipedia, LazyTown was one of the most expensive children's shows ever made.

The production is impressive, is what I'm saying, but the writing is... not great. It's often either manic or bland. We are very far from the target audience, though, and the show ran for a good number of episodes, so it must have done something right.

Let's talk holidays. "LazyTown's Surprise Santa" opens with a sequence where Sportacus uses a tennis racket to knock ornaments around to decorate his airship base. All I could think was, well, that's a lot of glass shards waiting to happen. When the episode proper starts, Robbie is upset because the LazyTown people always have a big Christmas party and they let Sportacus sit in the guest of honor seat. So Robbie sets up a big cannon on a timer that will fire a giant snowball into the party at 6 p.m. Then he decides that isn't enough, and he plans to disguise himself as Santa Claus to sneak into town and disrupt the festivities.

Then he sings an extended song about how much he likes being bad, which is honestly a little fun in its weirdness. At this point, early in the episode, I wasn't expecting for the show to get me to empathize with the villain, but... for all that he's a bumbling idiot, he has a more interesting character than the others. Not sure that's intentional, though.

Meanwhile, the kids are playing and preparing for the holiday party. We learn that one, Ziggy, is obsessed with candy, and Sportacus has a chat with him about how hyper he gets and maybe he should cool it. We really did appreciate that for a show about obesity, it doesn't seem to involve any body shaming, and doesn't even say "never" eat candy, just to use moderation. Of course, they also call fruits and vegetables "sports candy," which... excuse me while I roll my eyes and get some junk food.

Robbie (dressed as Santa) runs into Ziggy and bribes him to go away with tons more candy, which Ziggy eats and then quickly regrets after he starts bouncing off the walls. Then Robbie runs into Stingy (guess what his character trait is) and gets briefly sidetracked with his demands for presents. All the other characters head out to find a Christmas tree, and Robbie breaks into the house to steal their presents. A somewhat egregious amount of one-man slapstick later, he manages to get in and starts to grab gifts, only to discover that there's a present for him! Aww! So he puts the gifts back, but the others return before he can sneak out. They ask him to stay for dinner - and even want him to be the guest of honor and sit in the special chair! You see where this is going, but Sportacus gets Robbie out of the way of the cannon-powered snowball just in time. At some point, there was a terrible song about Christmas. That's most of that episode.

I want to note here that Sportacus always enters and leaves scenes with excessive CG-enhanced flips, and every time he rescues someone, he does it in the most extra way possible. It's ludicrous, and it contributes to the feeling I have that he's just too silly for all the kid characters to idolize him the way they do. I should also note that the actor who plays Sportacus is the creator and executive producer of the series. It's his baby. 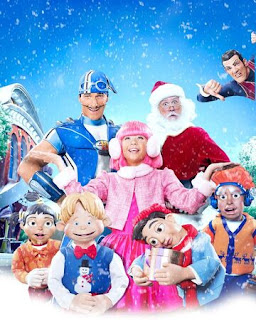 The first episode was actually the only one we had on DVD, but in researching the series, we discovered a second holiday episode, so we tracked it down. In "The Holiday Spirit," Robbie decides he wants in on the whole presents-for-being-good racket, so he offers to cook a turkey for the big town meal. His crazy cooking contraptions shoot the turkey into the stratosphere, where it knocks Santa out of the sky. Sportacus rescues Santa, but he passes out for a while. All the presents fall into Stingy's yard, where he takes them in, ecstatic that he got exactly what he wanted: what everyone else wanted.

Sportacus and Santa show up in town the next morning, and the kids are surprisingly understanding about the fact that their presents are missing. However, no one wants to have a party without Stingy, but he's being cagey on the phone about why he isn't at the party, so Santa goes to fetch him. Santa confirms that's where all the gifts ended up, and with very little prompting (especially considering this is most of the plot and there was lots of setup about Stingy's greed), Stingy agrees to bring the gifts into town and give them to their intended recipients.

This second episode was two seasons (and a significant break) later, featuring a different actress for Stephanie and a different parent company for the show. We didn't like the first episode much, but at least it had an intriguing weirdness. Unfortunately, that seems to have been largely sanded off by the time this second holiday episode was made.

I can't recommend this, but I can't completely discount it either. It had a vision, and you can tell that everyone is throwing themselves (between slapstick, gymnastics, and dances, often literally throwing themselves) into this show. You have to admire the commitment.