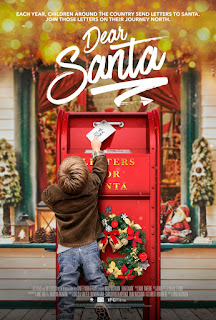 Not to be confused with either of the crappy low budget holiday flicks of the same name we looked at six years ago, Dear Santa is - at least ostensibly - a documentary about Operation Santa, the US Postal Service program that connects letters written by children with volunteers eager to fulfill those requests. I say "ostensibly" because I honestly don't think "documentary" is at all an accurate description, or at the very least not a complete one. While aspects of this qualify, I think the majority is closer to both reality television and a public relations video. That isn't to say it's bad - I actually think it's both technically well made and emotionally effective - it's just not really being truthful about the program or - unless I miss my guess - its participants.

The lie around the program itself is understandable. They want this to be viewable by kids, so both the origins of Operation Santa and its current policies are explicitly connected with the North Pole. Like Mall Santas through the ages, we're told everyone involved is assisting Saint Nick. This limits the documentary's ability to explore the program in any real depth, which is a bit disappointing, but - like I said - I get the trade-off. Besides, the focus isn't on the structure of the program so much as the letters, the kids writing them, and the people fulfilling those requests.

And that stuff is really well done. They found some cute kids with sad backstories, difficult situations, and/or quirky requests to explore. Likewise, the volunteers and Postal Employees being profiled are wonderful people. This is sweet, touching stuff.

Only... it's kind of fake. I mean, I'm sure it's not entirely fake. The volunteers are really doing this, and I'm sure those kids actually wrote the letters, but there's a gaping logic hole in the center of this around the fact those kids appear on camera.

This should go without saying, but the actual program protects the identities of the kids who write letters. Volunteers are given versions with names and addresses removed, and the Post Office acts as an intermediary. To a degree, the documentary maintains this, with the majority of gifts being delivered by Postal Employees. Only the camera crew comes along, too, so obviously it's staged, at least to a degree. Parents must have been notified and asked to sign waivers, and most of the kids probably knew someone was coming (in a few cases, it's pretty clear the kids aren't actually surprised). This is pretty obvious, even setting aside the cases where we see the kids interviewed about their letters in advance.

Is that a problem? In one sense, no: it's certainly better than the alternative. But at the same time, it certainly weakens the magic and raises quite a few questions, the first among them being whether the kids and families are being sufficiently compensated for appearing in something that functions as public relations material for the United States Post Office.

Side note: I wasn't able to determine what the precise relationship between the Post Office and the documentary was. They don't appear to have financed it, though they clearly provided a great deal of access to the filmmakers. And the movie is absolutely linked to from the official Operation Santa page. In short, this highlights a public service run by a government agency, and it was made at a time that agency was defending its right to exist. I believe strongly in the importance of a strong Postal Service for numerous reasons, but this doesn't sit particularly well with me, particularly when the "gifts" families are receiving are being presented in a disingenuous way.

I know this is an overly cynical approach to something this sweet, but what do you expect from a website with a banner where a candy cane syringe is injecting holiday magic into someone's arm? And, look, I mean it when I say I'm conflicted. I honestly did enjoy this. It really did pull me in. The idea of granting a stranger's holiday wish is enticing. It absolutely succeeds in selling the program.

But in the process, I can't help but feel I'm watching the world's cleverest ad. Take that however you like.