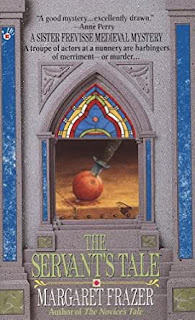 Premise: It's Christmastime at St. Frideswide's Abbey, but after an injured man is rescued by a group of traveling players, the events set in motion lead to murder.

This isn't a holiday book I sought out, but one I ran across while reading through a series. I thought about not reviewing it, but I reviewed its spiritual cousin The Raven in the Foregate years ago so I decided it has a place here. The Dame Frevisse mysteries are much like the Cadfael Chronicles - both extensively researched historical mystery series in a British monastic setting. So far though (this is only book 2), the Frevisse stories are a little bit darker.

This is mostly due to focusing heavily on female characters and their problems, which in this volume include lack of authority over funds/family, stillbirth, illness, and pervasive sexism. Not to mention the poverty and inherited servitude common across several characters. The Cadfael books include all these topics, but they also often include young lovers and romantic heroism, which this series hasn't yet dabbled in.

This volume is split between Dame Frevisse, the nun who is the main character of the series, and Meg, a young woman whose family serves the local lord. Meg's husband is a drunkard and her older son argumentative and lazy, but she has been taking on extra work and pinching pennies in the hopes of paying for her bright younger son to escape their life and become a priest. Her husband is injured at the beginning of the story, but instead of freezing to death on the road, a group of traveling players bring him to the abbey. Unfortunately, he doesn't make it, although he is able to have last rites before he passes.

The players (an informal family of three men, a woman, and a child) are trapped by weather and an illness in their child, so the nuns hope to have a show for the holiday, (something "appropriate"). However, Meg's older son ends up dead after a fight in town, and suspicion falls on the players.

We find out that Frevisse's parents were travelers, and she struggles throughout this book to separate her instinctive defense of the players from her desire to learn the truth, no matter where it leads. Between this and living for a time with her uncle, the son of Geoffrey Chaucer, Frevisse has a broad base of knowledge and experience to inform her investigations (another similarity with Cadfael, the former crusader).

The main way the book dwells on the holiday setting is in the two performances the players put on: one a humorous parable about Saint Nicholas and one the story of the three Wise Men. Thematically the book is related to the Christmas season as well, as the solution to the mystery hinges on spiritual questions raised by Christianity.

I suspected the solution to the mystery, but I still found it emotionally impactful. I think it's a great book, but it's not a happy story. It's a dead-of-winter sort of tale with an unambiguously melancholy ending.