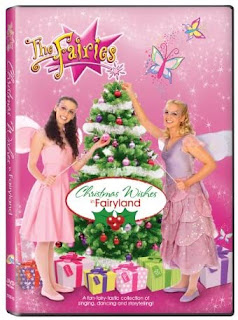 Wow. It took us a surprisingly long time to confirm the information in that title. Another from our stash of random DVDs bought from clearance bins, this... film? Extended episode? DVD special? is part of an Australian children's franchise that apparently started with some direct-to-video specials, then got recast, rewritten, and prettied up (by WETA) to launch a full television series, a longer series of direct-to-DVD movies, a program for ballet schools, and probably some stuff I'm missing.

Both generations of this property did a Christmas movie, but this is the later one with more professional production values. The fact that we weren't sure about that until after some thorough research tells you something about what a low bar "more professional" is in this case.

I don't love to hate on low-budget kids' stuff, but this is very strange, and not really in a good way. The actors are giving it a lot of energy and drive, even though they all seem like people who failed their audition for the Wiggles. Maybe episodes/movies with actual plot are better? Do other episodes have actual plots? I doubt it, but I can hope. For the sake of the children of Australia.

In any case, this starts with a brief song and an intro in which main fairies Harmony and Rhapsody explain that they're going to turn Fairyland into Christmas Fairyland with a spell, and then they recite a poem to add some decorations to their set. I did appreciate that there is no fake snow - remember that in Australia, Christmas is in high summer.

I should mention that everyone in this show would get teased at the Ren Faire for buying their costumes on sale at PartyCity. Besides Harmony and Rhapsody, this includes a scattering of well-meaning kids, and two adult men playing a bumblebee and a wizard. We spent some time speculating as to whether the wizard was in fact a gnome based on his costume. At least the dancers have legit dance outfits with their cheap sparkly wings, but we'll get to them next.

Soon after the intro, there's a "warm up" with Fairy Princess Minuet the Dancing Fairy which seems like a standard part of the show. The dance bits are okay, but there's also an instructional poem which gets way too close to "little girls should be seen and not heard" for me to be comfortable. I know it's supposed to be a routine for getting kids to be quiet and pay attention, but it definitely put my hackles up. Minuet and a few other dancers reappear a few times during the show to dance some more, and they are okay dancers doing routines adequate for advertising ballet classes to little girls but kind of boring for anyone else.

Almost the entire rest of the runtime is taken up by the cast singing Christmas carols. There were, I think, two songs I didn't recognize that may have been written for the previous holiday media put out by The Fairies. There were also two traditional songs (Jingle Bells and We Wish You a Merry Christmas) that were given fairy-themed lyrics. Other than that, it's wall-to-wall birth of Jesus.

Yup. In a move that seems truly and profoundly bizarre to us, the hosts, women dressed as fairies with CG-enhanced magic powers, go all "reason for the season" in their song intros and sing a ton of explicitly religious Christmas music. I mentioned to Erin that this might not seem as jarring outside of the U.S., where we try so hard to segregate the religious parts of Christmas from the secular parts, but I'm only guessing about that.

A few notable highlights: the intro to Oh Holy Night talks about the majesty and beauty of the song, but then the arrangement is syncopated, reminds me of Sinatra - a very odd mismatch. Also, their intro completely misses the point of Do You Hear What I Hear, but most people misunderstand that one. There are a couple songs "played" by kids in fairy costumes, but you can't actually hear any of the instruments they're supposedly playing over the synth in at least one of those.

Another important note: the commentary that introduces the songs (and all dialog, in fact) uses the word "fairy" a lot. Mostly as an all-purpose substitute for words that sound vaguely like fairy: "a fairy merry Christmas" and as a random intensifier: "fan-fairy-tastic". Yes, this is much like the use of "smurf" in the Smurfs, although it more reminds us of casual use of the f-word. Someone could easily make a very funny video by beeping out all the uses of "fairy" in a clip of this.

At some point, we learned the five fairy rules of friendship. It's fine, except for the bit about always being cheery. Never trust anyone who tells you good friends should always be happy.

After nearly an hour of this, the cast reads a mediocre poem about belief. It's clearly the end...

After truly Return-of-the-King levels of "this, THIS number must surely be the end" fake-out endings, Santa shows up for the true finale, and we are released to try to piece together what the heck we just watched.

I hope it's obvious that I wouldn't recommend this to anyone, although it comes close to being you-have-to-see-it-to-believe-it. What an odd experience.