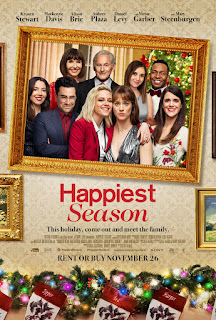 When making a Christmas movie, it's important not to take too much on. It's fine to try and blend a couple subgenres or ideas, but if you were to, say, attempt to fuse three distinct premises into a single movie that's already destined to be unfairly judged as the first mainstream lesbian romantic Christmas comedy, then one of two things is going to happen. Either something isn't going to work and your gingerbread house of cards is going to collapse, or...

...Or you're going to inexplicably pull off a goddamn miracle of a film that puts damn near every other Christmas movie ever made to shame and causes everyone else working in Hollywood to resent you for making them look bad.

Yeah, so, if I were director Clea DuVall, I wouldn't expect to get invited to a lot of holiday parties this year, but that's fine because there's a pandemic. Besides, she could probably use some time to start drafting acceptance speeches, because this movie is the real deal.

In case it wasn't clear, this isn't just one of those movies I'm recommending. No. We're past that. This is REQUIRED viewing. It's on Hulu right now, and seriously, why are you still reading this inane article? Go. Watch it. Now. I'm serious.

Okay, I'm going to assume if you're still reading, that means you've seen what's probably the best romantic comedy set at Christmas since The Apartment. Only that's really just scratching the surface, isn't it? Because it's also the best dysfunctional Christmas family flick since The Lion in Winter. And there's a damn good drama in there, too. How the hell is this movie even possible?

Setting aside the twist that the central couple is gay, the movie opens with what at first seems like a conventional set up: one of them loves Christmas while the other finds the holidays depressing. So the yuletide fanatic invites the Grinch home for the holidays. For about thirty seconds, I was convinced I knew where this was going.

Only the curveballs start flying almost at once. The Grinch isn't acting like she's supposed to. She's not only committed to embracing this challenge -- she wants to use it as an opportunity to propose to her girlfriend. She wants this to work. She wants to change her outlook on the holidays.

Let's back up and talk about the cast. Kristen Stewart plays Abby, the woman meeting her girlfriend's dysfunctional family, and contrary to the usual conventions, the movie is almost entirely from her point of view. Mackenzie Davis plays Harper, the love interest, Alison Brie plays a sibling in a lifelong competition with Harper, Aubrey Plaza is Harper's ex who befriends Abby, and Dan Levy plays Abby's best friend. Basically, if you can't find at least three of your favorite actors under forty in this, you've been watching the wrong things for the past decade.

I don't want to go too far into the plot, because frankly it's less driven by story than structure. The longer I consider this movie, the less certain I am it's really a romantic comedy. I'm not challenging its right to be classified or watched as such, but if you dissect the film, I think the skeleton is actually that of a dysfunctional family comedy, not a rom-com. But because it's primarily told from the point of view of an outsider to that family who's in love with one of the members, it plays out like a romantic comedy.

Only that's not quite right, either. It might be more accurate to say it plays out like a romantic comedy in reverse. It opens with the protagonist having already found a loving relationship, only to deconstruct both her relationship and her understanding of her partner. As a rule, romantic comedies treat people as one- or two-dimensional characters: once you know "the real person," there's nothing more to discover. But that's not how people work, and that's a big part of what this movie is about. Harper has secrets, sure, but it's not the secrets that create tension between her and Abby: it's the reality that she has an entirely different personality Abby's never met.

Then there's Harper's family. I keep referencing dysfunctional families, and your mind probably goes to National Lampoon. And while that's not entirely wrong, I want to stress there are stretches of this movie that feel closer to Get Out. We're seeing Harper's family through an outsider's eyes, and their antics, while hilarious, are also off-putting and disturbing. As the movie goes, we like them less and less as people.

Until the third act, that is, when...

Look, I've seen a lot of romantic comedies, so I've seen a lot of movies where one of the leads walks away. And I am straining to think of a single example other than this where that happened and I wanted them to go rather than to talk it out. Even if a character's actions make sense in the narrative, there's generally a misunderstanding or a simple mistake or something that feels easier to solve than the characters believe. These things are always by-the-numbers, you know how they're going to end, you know the couples' problems can be overcome...

This was different. I wanted Abby to walk out the door when she did so. It felt right. Then when Harper inevitably chased her down and confronted her, I didn't know how the movie was going to end. I didn't even know how I wanted it to end. For the first time I can remember, a romantic lead felt like she had a real choice.

The movie went with a sweet ending, by the way, and the resolution was perfectly satisfying. I actually think it could have gone the other way and been just as good, which is a testament to how well this was constructed.

By the end, Abby (and the audience) understands Harper, who manages to reconcile the different sides of her personality. She's finally able to be honest about who she is with her parents and, more importantly, with herself. Also, it turns out the rest of the family has more than one side to their personalities, as well. The movie does the whole fight-that-ruins-Christmas cliché, but like everything else, it finds a way to make it fresh, funny, and touching.

There's no single reason this movie works as well as it does, but I want to single out one element I found particularly impressive. DuVall succeeds where many, many others fail in presenting the comically absurd in a way that feels subtle, natural, and honest. The characters in this are as over-the-top as any in the genre -- the sisters are neurotic, there's a pair of twins who act like they just stepped out of a haunted cornfield, and the script hits a lot of the same beats you'd expect in a Christmas farce.

But this isn't a farce. Even when things devolve into madness, the movie centers the comedy on the characters, sacrificing cheap laughs for good storytelling, and it's both funnier and more effective as a result. This combines over-the-top humor with heartfelt, emotionally grounded drama in the same movie without it feeling forced.

If this doesn't at least win Best Screenplay, why the hell do we even have the Academy Awards?

I feel like I'm barely scratching the surface. Hell, I hardly touched on the significance of making a same-sex romantic comedy at this scale. That would be worth celebrating even if this was an otherwise typical entry in the genre. But this isn't a typical movie -- it's exceptionally crafted. If for some reason you haven't already done so, go watch it now.