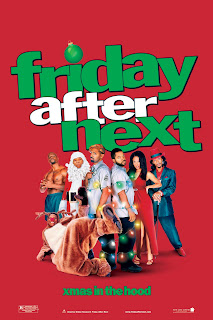 This is going to be one of those incredibly awkward situations where I'm looking at a Christmas installment in a series where I didn't see the earlier films. I'm not sure if it makes it more or less awkward that this one was reviewed far more harshly than the original (the middle installment wasn't received any better). So obviously take my opinion with a grain of salt.

And that opinion seems to be in line with the consensus. Overall, this didn't work for me, and a lot of the jokes have aged badly.

The series stars and was co-created by Ice Cube. Stylistically, it's reminiscent of Clerks, particularly for the first half. The story here is incredibly thin, which isn't necessarily a bad thing in a comedy, so long as the jokes pick up the slack. Again, they didn't work for me, though I'm not really the target audience and there's absolutely a possibility a lot of the humor went over my head.

The movie opens with a thief dressed as Santa breaking into the apartment where Craig (played by Ice Cube) and his cousin, Day-Day, live. Craig wakes up and tries to fight him off but the thief gets away with their presents, valuables, and rent money. That money is a problem, because their landlord wants it immediately, and if they don't pay...

Ugh. Remember I said some of the jokes didn't age well? Well, their landlord's nephew, played by Terry Crews, just got released from prison, and he threatens to rape Craig and Day-Day if they don't pay up. Homophobia is a running theme in this movie.

Their only hope of earning the money is at their new job as security guards for a local shopping plaza. About half the movie is concerned with their experiences, as well as introducing the expanded cast of characters. For the most part, none of these characters actually influence the main story - they're mostly just present for comedic side plots. Again, I didn't really find most of these funny. In the middle of this, they get robbed by the Santa again, though they don't have much to take.

They eventually get fired and decide to raise the money by throwing a massive Christmas party and asking for contributions. That's more or less the second half of the movie, and it includes more side stories where the characters from the first half interact again. So... more rape jokes, more homophobia. 2002 was a weird time for comedy.

At the end, they spot the thief a final time and chase him through the neighborhood in an extended sequence that pulls in gangsters from earlier as well as a man with a shotgun I'm assuming was from an earlier movie. Some of this sort of works by virtue of escalating absurd situations, but it still could have used a story arc or theme.

The movie culminates with the thief getting hit by a car, Craig and Day-Day recovering their belongings, and eventually strapping the thief to a roof with Christmas lights. So... yeah, not much in the way of resolution.

After the thief got run over, I briefly thought it might take a tonal turn and have the protagonists realize they needed to get him help. Maybe explore his motivations, humanize him, and do a Grinch ending where he returns the things he stole and joins the community.

Nope. Strapped to a roof with Christmas lights and left for the police or for dead, whichever comes first. I don't need or want every movie to end with a moral, but the lack of any complexity around the character driving the narrative meant the movie lacked a coherent story. That's bad writing.

The holiday elements are also underutilized, in my opinion. The entire movie takes place on Christmas Eve, which is a good choice for this premise. But for whatever reason, there weren't really any moments where the shopping plaza they worked was appropriately busy. It was established this would be the case, but we really only ever saw a handful of shoppers at any given time.

One interesting side note: Terry Crews and Joel McKinnon Miller both appear in this, and would later be cast as regulars on Brooklyn 99. Probably not the best sign that's what stuck with me from the movie, though.

Again, I'm a little hesitant to completely write this off, since it's neither made for me, nor did I see the first two movies in the series. That said, I really couldn't find anything I liked in the movie. The characters are underwritten, the jokes don't hold up, and the plotting is unsatisfying.

Maybe there's something good in here I'm missing, but I just couldn't find it.