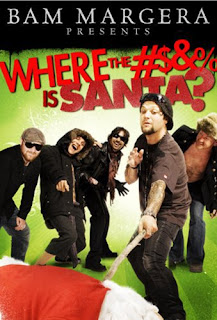 By its nature, Mainlining Christmas often leaves us scrambling to cobble together some sort of context for media we're unfamiliar with. We regularly check out Christmas episodes of shows we've never seen or wander into genres we otherwise avoid. But this takes that to a whole new level.

We put this on not knowing who Bam Margera is or what we were getting into. We're of course familiar with Jackass as a concept, but neither Lindsay or myself ever actually watched anything from that franchise before, nor did we realize it had spawned multiple spin-offs under different titles. I actually assumed I was putting on a conventional comedy.

This was... I'm honestly still not sure what the hell this was.

Like I said, I've never seen Jackass, but my impression is it's primarily defined by over-the-top, idiotic stunts intended to shock the audience. And, in a sense, that's what this was. Only... it wasn't?

Imagine someone created a movie revolving around a series of astonishing stunts loosely held together with a flimsy storyline and intentionally offensive and stupid characters, all told through a pseudo-reality show filter. Okay, now imagine they failed to actually deliver on the stunts.

That's not to say this didn't have stupid stunts - it did. They just weren't all that memorable. And in several cases, it's not at all clear they were real. My understanding is this franchise doesn't fake that sort of thing, but if that's the case the editing undercuts a lot of what went on. If you're actually shoving a man into a box and pushing that box down the stairs, you probably shouldn't cut in between, then cut again when he hits the bottom, because I'm going to assume you just used camera tricks. Similar issue with a scene where a man's in a tree getting cut down - was he really? If so, they probably should have done a better job capturing it on film.

Likewise, there are a number of sequences where stunts that could otherwise have been shocking are sped up or just kind of tossed in as an afterthought. If your actors are putting themselves in harm's way, shouldn't you at least give the moment some gravitas? I'm not saying I'd have enjoyed this more if it had been shot, cut, and edited in a way that highlighted the danger and absurdity of these stunts, but I'd have at least have respected the effort. This was just... it was profoundly, astonishingly stupid. Maybe the stupidest thing we've seen for this blog.

Before anyone comments, I understand that's largely intentional. This movie was setting out to be impossibly dumb and even more offensive. It wasn't aiming to be high art. But I do think it wanted to be memorable, and there was nothing in this that delivered much impact. Ultimately, the only thing left holding this together was its plot, which...

Okay, fine, let's do this. The story - to the extent the term applies - centers on Bam wanting to get his wife the perfect Christmas gift, which he decides would be bringing the real Santa back from Finland (don't even try reconciling that with this being both a hard 'R' and presented as a reality show). He makes a bet with a friend (the term should probably be in quotation marks - he's pretty horrible to almost everyone in this movie). I guess the bet is supposed to increase the stakes, but what are stakes if we're not supposed to care in the first place?

He sets out with his entourage as they travel to Finland and head north, hanging out with rock stars, drinking, and doing stupid shit on the way. Meanwhile, his wife and parents set up a Christmas party in a subplot that starts out heading nowhere and still manages to get lost. Bam and company reach the arctic circle and wander around the woods.

Sorry - I can't let this go. I know "reality television" is an illusion in the best of circumstances, and I recognize this is closer to a parody of that genre than an exemplar, but don't tell me you're at the arctic circle on the winter solstice and shoot during the day. There is no #$&ing daylight there on December 23rd.

At any rate, they eventually reach Santa's castle (actually a theme park, but I *think* the movie was implying it was the real deal). Unfortunately for Bam, Santa is vacationing in the Bahamas, so he's out of luck. On the way back, they find a guy in a bar who looks like Santa and decide to bring him back and pass him off as Santa. This works, because why the hell not, and the movie ends with a massive party.

That's about it. There's a subplot about a "friend" Bam constantly bullies who goes with them and wins a bet about getting laid. Also the same friend eats a reindeer eye, throws up, and later defecates the intact eye (don't even try and tell me that last part was real). I don't know - maybe that's supposed to be the A-plot?

Again, this is all supposed to be offensive, so I almost feel obligated to give them a pass for being gross and crass. I'm less inclined to forgive them for making this so boring. Yes, moments in this are disgusting to watch and worse to think about, but the majority is just exhausting to sit through. They're playing caricatures acting like frat boys unhindered by rules, laws, or consequences, but the things they do are more stupid than shocking.

There are moments that manage to truly offend, but these are hardly an achievement. Unless you think sexual harassment is the pinnacle of comedy, there's nothing in this of substance, let alone value. This isn't testing cultural norms or saying anything: it's nihilistic nonsense.

After more than a decade doing this blog, my ability to calibrate awfulness is warped to the point that phrases like "absolute worst" have lost all meaning. Is this really worse than a dozen or so other truly horrible things I sat through in Christmases past? I have no idea. But I will say I hope I never find myself watching anything this bad again.

You shouldn't either. In the unlikely event you ever find yourself with the option of watching this, find something else to do with your time. Anything else.