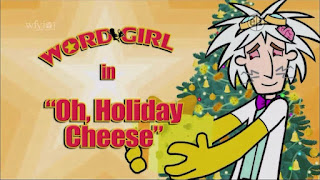 WordGirl is my go-to example when I want to argue good superhero stories can be told at any level of maturity. The series is unequivocally targeted at young kids - it's edutaiment, through and through, complete with vocabulary lessons repeated multiple times to the viewer. It's the kind of show you'd expect to be tedious and pedantic. Instead, it's ridiculous fun.

The reason WordGirl works is it understands its genres. The writers clearly understand the conventions of both kids television and superheroes, and they're eager to play with both. They're willing to mock PBS conventions in a good-natured way, and they're more than happy to embrace comic book tropes. The result is a series that plays like a pureed homage to Sesame Street, Powerpuff Girls, and Superman.

The holiday episode is a fine example. After the narrator introduces the episode's special words (curmudgeon and festivity, in case you were interested), the episode shifts to a brief battle between WordGirl and Energy Monster. WordGirl and Captain Huggy-Face (her partner, a space pilot/monkey who comes from the same distant planet as... sorry - I'm getting off track) take care of the monster problem, then transform into their civilian identities of Becky Botsford and Bob. They head home to the Botsfords' home for a cheese-themed holiday party.

Meanwhile, across town the villainous Dr. Two-Brains (a scientist who was once friends with WordGirl before an experiment gone wrong fused a mouse brain to his head and turned him evil - I LOVE THIS FREAKING SHOW) has upgraded his teleportation ray to work long-range. He sees the Botsfords' celebration and decides to steal their cheese.

Becky and Bob slip away and transform back into their heroic identities then burst into Two-Brains' lair, only to be snared by his henchmen's string-cheese guns. This doesn't hold them long - they trick the mad scientist into hitting the cheese with his ray in reverse.

As usual, the episode works because the writers maintain a sense of humor about the material while still delivering a story within the genres presented. This is, at its core, a superhero story, regardless of how silly the villain's plan or motivation is. The holiday elements are front-and-center, as well, playing with the usual conventions, albeit with the series's usual wit. Sure, it's cheesy, but they acknowledge as much in the episode's title.

This is officially a "holiday" episode - the word "Christmas" is never uttered, despite the prevalence of secular Christmas decorations and tropes. It's subtle about the choice, but consistent.

All in all, it's a solid installment in a great series. There are definitely better episodes, but this is certainly enjoyable, especially if you're looking for something safe for all ages.
00's Comedy Edutainment Episode Erin Snyder Highly Recommended Superhero