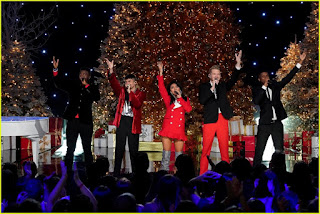 Now, I like vocal music, and I like a cappella music. But when it comes to Christmas, I am over Pentatonix. They're good at what they do, but I think much of their stuff blurs together, and it's incredibly overplayed.

Like most variety-show style holiday specials, this was mostly boring.

The opening wasn't terrible. For once, Jay Leno was actually amusing as he stubbornly refused to recognize the singers as anyone famous. The rest of the show alternated between songs on stage in front of an appropriately adoring crowd, songs on stage with guest singers, and short "comedic" bits filmed separately.

The Pentatonix crew seem nice enough, but they are singers, not actors, and they felt stilted and awkward whenever they had to deliver a transition. I was most amused by the fifth guy. One of the members of the group dropped out earlier this year, and apparently, the new guy hasn't been accepted/made official yet. They introduced him separately, and he quietly disappeared from the stage whenever there was a talking part, only to reappear when they started singing, always while the camera was pointed somewhere else.

The first comedy bit featured Kermit the Frog (voiced by not-Steve Whitmire...) and the doppleganger villain from the 2014 Muppet movie. Odd choice, that. The plot was something about stealing Christmas presents; it wasn't interesting. The other was a obnoxious stop-motion piece with a song about a magic snowman made from filthy city-street snow. This seemed like it was intended to be funny and subversive, but it was just kind of dumb.

On the guest star front, Jennifer Hudson impressed with her Christmas-elf-in-space outfit and her resonant voice. There was a country star who was forgettable, and a young girl who won America's Got Talent. She's a singing ventriloquist, and her bit - with a rabbit puppet who sings "O Easter Egg" - was pretty cute.

The Pentatonix numbers were... fine, I guess? This seems like the kind of special you could turn on instead of the radio while you're doing something else and not miss much. They were sometimes joined by mediocre dancers whose choices of moves never seemed to match the music.

One odd thing was how many numbers actually had instruments. Yup, instruments. For us, this was just confusing. If you're using instrumental backup, then you're just singing in harmony. It's decent Christmas music, but it's no longer that impressive.

Oh, one last thing. There was a commercial for Amazon built into the special. Yup, filmed with the singers, written like a long commercial, but part of the special itself. We watched it on Hulu with the no commercials plan and everything.

Part of me thinks it's almost neat that a throwback style like this type of special (which is so overdone that even parodying or subverting it has been done over and over) includes a throwback like a built-in commercial where the stars of a show hawk a product.