The Mensch on a Bench 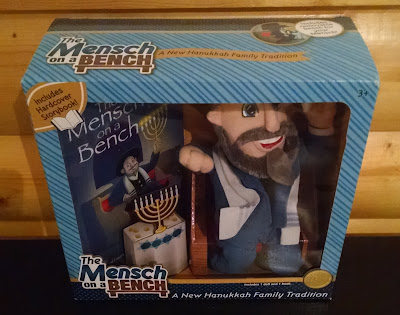 While I haven't actually gotten my hands on an Elf on the Shelf yet, I've heard a great deal about it. And from that, I suspect The Mensch on a Bench may be just as good an idea as the Elf.

If you think that's a compliment, you probably don't know much about Elf on a Shelf.

The "Mensch on a Bench" was introduced to the world on Shark Tank. Sadly, they gave it an influx of cash and some publicity instead of letting it die there.

Like the product this is clearly ripping off, The Mensch on a Bench includes a book and stuffed doll. Also, it sits in your house, sleepless and ever watchful, judging your children. 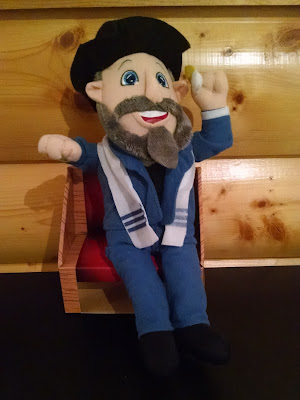 You also get a removable cardboard bench, because "mensch" doesn't rhyme with "shelf." The doll is fine, if unremarkable. I doubt he'd stay on his bench without being tethered to it, though.

The story of the Mensch on a Bench is essentially the story of Hanukkah with all the interesting war stuff excised. Instead, Moshe the Mensch sat around watching oil last eight nights. Plus, he invents dreidels, makes latkes, and gives out candy coins. 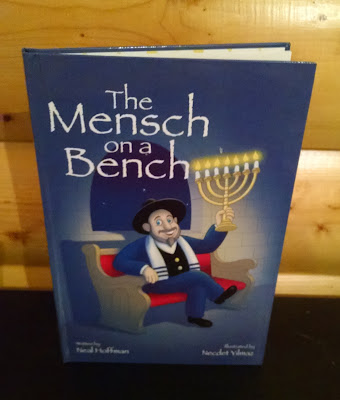 The writing in the book is miraculously even less interesting than it sounds, and the art is simplistic and dull. Also, the "oil" is replaced with candles in the illustrations to make it easier for kids to understand.

Crap like this is why people with one Jewish parent don't grow up and start blogs called "Mainlining Hanukkah." Just saying.

The short book also manages to wedge in some "rules" for bringing a mensch into your home. You'll find these on the back of the package, too, and I think they warrant discussion: 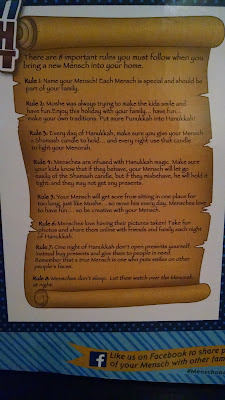 The first rule is that you should name your mensch. We named ours "Crappy the Hanukkah Elf."

The second rule instructs you to put more funukkah into Hanukkah, which I'm pretty sure they stole from Adam Sandler's song, Eight Crazy Nights. This does not bode well.

Rule three tells you to give the mensch a candle to hold. It does not explicitly state you shouldn't light that candle first, which is poor design, seeing as how this would clearly go up like a matchbook.

Rule four... oh, God. Rule four tells us the mensch is infused with Hanukkah magic, and that the mensch will punish kids who misbehave, which is bullshit, but hold on a minute. Hanukkah magic? Seriously?

Rule five states your Mensch gets sore sitting still, so you should move him somewhere new. You know, like the garbage or the disposal.

Next up is for you to take pictures of your Mensch and share them on social media. I promise you, the rights holders for this would not be happy if I followed this rule. I am seriously considering it.

Number seven is to tithe one night's worth of Hanukkah gifts to the less fortunate. That's... okay, that gets a pass.

The last rule is to let your mensch watch over your menorah at night, because they don't sleep. Again, they probably should have specified that the flammable doll shouldn't be placed directly over the flame.

This should probably go without saying, but this thing is idiotic. Any goodwill it might have earned as a quasi-parody of Elf on the Shelf is squandered immediately in its utter lack of humor or self-awareness. There's nothing interesting, fun, or endearing about this concept, and its attempt to make Hanukkah relatable to kids fails even more dramatically than every single prior attempt I've come across.

Either Hanukkah should embrace its more solemn aspects, or it needs to seriously step up its game. They're competing with a magical toy maker who controls an army of arctic elves: some moron on a bench isn't going to cut it.

We found one clearanced for 70% off the normal price of $30 and wound up paying $9 a few days after Hanukkah ended last year. If we'd waited another two days, we could have saved another buck - I saw it going for $8.
Book Erin Snyder Hanukkah Toy