By Lindsay - December 15, 2017
In case you're not a cartoon aficionado, Teen Titans Go! is a wacky comedy starring highly stylized versions of the characters from the original Teen Titans show. It's much, much sillier, and has no or next-to-no continuity.

It is not connected to the previous shows Young Justice (a serious action show about young superheroes) or Batman: The Brave and the Bold (a mix between wacky tropes and serious superhero action), or the current show Justice League Action (mostly comedic superhero action).

Erin covered some of the mixed feelings we, and many fans, have about this show. I'll only add that I am personally inclined to give this a good deal of leeway. I loved the original Teen Titans, but I also like having the option of complete zaniness. Anything that punctures the self-important grimdark that has recently been a big part of DC comics is a good thing.

Okay, on to the episodes! 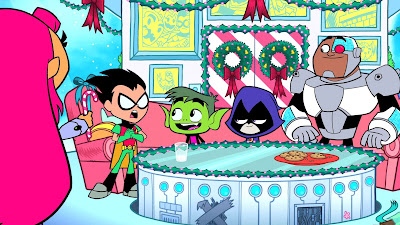 The Titans are celebrating Christmas with enthusiasm: food, decorations, presents, the whole nine yards. But the next day, Cyborg, Raven, and Beast Boy are sad that it'll be a whole year before they get to do it again. Robin is fine with getting back to work, and Starfire is preparing to head home for a Tamaranian holiday.

That's when an overheard remark is misunderstood. Cyborg, Raven, and Beast Boy realize they can make up a new holiday and Starfire will believe them. And so, Second Christmas is born.

They come up with "Second Santa" (a skinny guy in a green tracksuit) and tell Starfire that they should decorate and give and eat even more than they did the first time! Robin tries to tell Starfire the truth, but she dismisses him as a "grouch" with a punch to the face, as suggested by the others.

However, all this merriment backfires when Starfire finally realizes the truth: that her friends lied to her for their own selfishness, causing her to miss a sacred holiday, and she attacks them all with super-powered fury. The combination of the battle and the decorations overloads Titans Tower's power grid, and there is a massive explosion.

The Titans wake up in the hospital, to discover that they've all been in comas for almost a year. Which means.... there was a Second Christmas miracle after all! Christmas is tomorrow, and they get to celebrate again right away! Second Santa waves at Starfire as he jetpacks away. 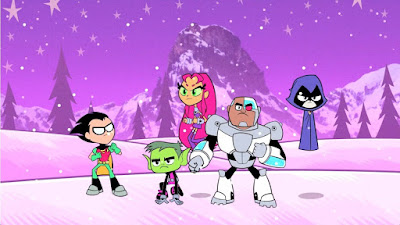 It's Christmas and the Titans all jump out of bed to find... nothing? They declare that Christmas is for family and friends, anyway. Fast forward a few years, though, and they are sick and tired of being ignored.

The natural thing to do, of course, is break into Santa's workshop and erase their names from the naughty list, "by any means necessary." They make their way to the North Pole, disguise themselves as elves, and proceed to prove that they deserve to be on that list. Cyborg gets an elf fired by lying about who made noise on the assembly line. Beast Boy teases Rudolph until he takes off on his own. Starfire and Raven meet a gingerbread man and proceed to eat his entire house, his cat, and possibly him.

Robin makes it to the list, but he can't affect it, and that's when they're all caught. After a snippet of a very catchy intro song, Santa tells them that they shouldn't be so upset, that Christmas is for family and friends! Robin says okay, then you won't mind if we do this, and blows up the workshop.

Santa tries to bluff them, saying that now they can concentrate on people doing good and being together and... he breaks down pretty quick and thanks the Titans for teaching him the true meaning of Christmas: Presents. Raven uses magic to bring the workshop back and they proceed to deliver presents to all the kids, naughty and nice alike.


It's the "cartoony" lack of repercussions for anything that makes this show fun. I liked the subversive humor in both episodes.
2013 2015 Episode Lindsay Superhero