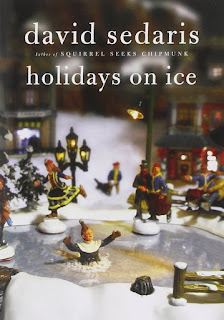 I haven't been subjected to this unpleasant an attempt at "humor" in some time.

I thought I knew what I was getting into with this, and I expected it to be mixed. Erin spoke in the past about how much he disliked most of the Sedaris segments on This American Life.

The first story is the most famous: the author's lightly fictionalized account of working in Macy's Santaland. It's not bad, I guess. Aspects of it are amusing. However, I have a certain personal affection for the hardworking Macy's elves, the flagship store itself, and the young aspiring theater folk of New York, so I found the author's "ironic" cynicism unamusing and tedious.

The narrators in the four stories that follow are universally unlikable. Even though the point is often for the reader to therefore feel superior to the humorless adult who misses the point of a children's play or the murderous, racist grandmother, that doesn't actually make the experience of reading this person's perspective at all enjoyable.

It's all so obvious. The narrators make social gaffes or comments that would smack of malice in a real person and feel unpleasantly pretentious on the part of the author in a fictional one. One story somehow manages to parody a person who would attempt to exploit a small poverty-stricken town while never convincing the reader that the author has any sympathy for said poverty-stricken town, but is just using the idea as a punchline for his so-clever joke about Hollywood.

A series of shorter stories follow that feel more authentic and are more interesting. With the exception of "Dinah, the Christmas Whore," probably the only story in the volume that I would call actually good, the second half of the edition I have was not part of the original 1997 edition.

Unfortunately, after those come a few more very short stories, some related to other holidays, that fall almost entirely flat.

All in all, despite a few in the middle that were pretty decent, I'd call this a waste of time and energy to read.