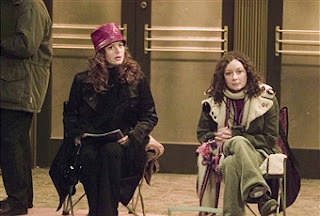 The season six Christmas episode begins at Grace's company holiday party. (Since it's just her and Karen, does it really count as a company party?) Will doesn't show, claiming some sort of charitable appointment, but really he's in line for tickets for a special Barry Manilow Christmas concert.

Grace discovers him there and holds his spot while he goes to use a restroom. Then she spots her mother having dinner with Jack, after telling Grace she wasn't coming into town for their Hanukkah dinner. Grace deals...poorly with this, first making a scene about how she's glad her mother isn't taking up her time, and then breaking down over missing their traditions.

Meanwhile, Will is in line at Subway to use the restroom and a man flirts with him awkwardly. Will brushes him off, only to discover later that he's Manilow's road manager. He tries to strike the flirtation back up, and the guy basically blackmails him into a date.

This episode occasionally came close to being touching or funny, but it kept taking a sharp turn back into awkward or uncomfortable whenever that happened. 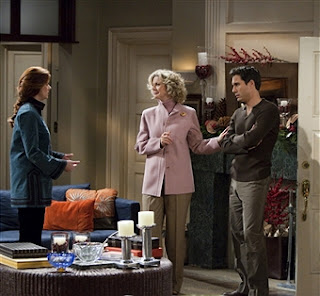 The main plot in this episode is that Grace is invited to Will's mother's house for a party and breaks an expensive figurine. She feels awful and is ready to come clean, but Will convinces her not to.

Cue a series of ludicrous situations in which his mom ups the pressure. Will finally tells Grace to confess, but at that point... she won't? And she doesn't even acknowledge that she wouldn't' be in this situation if he hadn't told her to lie about it in the first place. It doesn’t make any sense

There’re a lot of incoherent character moments in this episode.

The second plot is that Karen's stepdaughter is dropped off for Christmas. Karen wants nothing to do with the girl and pays Jack to look after her. Then all it takes for Karen to inexplicably change 180 degrees on her stepdaughter is for Jack to mention that he enjoyed spending time with her. It's not clear that she's jealous, it's not that she changes her mind about the stepdaughter, it's not that she believes Jack when he says that the girl is interesting and growing up to be fun. She just... decides to crash their party just because.

It’s always a surreal experience to listen to a laugh track and never, ever laugh. 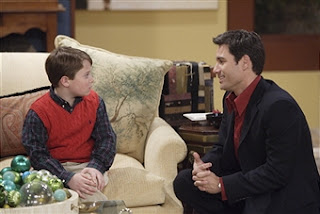 This is the last Christmas episode, and it was at least a bit funnier than the others.

For some reason, Will, Grace, Jack, and Karen are going to Will’s mom’s house for Christmas.

It was weird that Will’s mom seemed humorously caustic and pompous last season, but for this episode, she's been rewritten to be racist and somewhat anti-Semitic as well.

Will's nephew is a stereotypical little gay boy. Will is worried that his mom will freak out to have another in the family, so tries to keep the kid from being too flamboyant. Of course, he wants to put on a show, and Jack encourages him. The thing that kept frustrating me about this episode was that the obvious solution to being worried about his mom's reaction to the "show" would have been for Will, Jack, Grace, and Karen to commit to being enthusiastic. But I guess that wouldn't have created drama.

Meanwhile, Grace must have dumped her husband sometime in the previous season because she's navigating a mutual attraction with Will's brother, who's also recently divorced. This plot was not as awkward as it could have been, but it wasn't great.

The resolution to the episode was crazy mature for this show: Grace and the brother decide to step back for now and see where they're at after he's been single for a while, and Will's mom embraces the nephew's theatrical gesture because she regrets having been hard on Will as a boy. (Of course, this is after Will selfishly and ridiculously flips out after his mom is supportive of the kid. Way to be an adult, Will.)

I remember liking this show when it first came out because I was enthusiastic about representation, but I think that much of the zeal people still have for it must be rose-colored nostalgia. I just don't think there's much to enjoy about people being jerks to each other, and too many of the jokes are about that for my taste.
00's Comedy Episode Lindsay