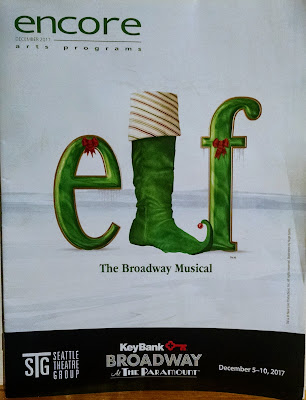 There are only a handful of movies and specials that we've watched over the years that Erin and I have felt strongly enough about to review separately. Elf is one of those films. I don't like it much; Erin does.

Now I can embrace my dislike of the movie more than I allowed myself to in that article because I have seen what the story can be instead.

It turns out, I like Elf a lot once you remove Will Ferrell, the more juvenile/gross humor, and the poor musical choices.

You know the story more or less, right? Human raised by elves goes to meet his father in New York, misunderstandings ensue, everyone learns the importance of family, love, and to be open to magic and wonder.

In the touring production I saw this year at the Paramount Theater in Seattle, Buddy was played as sheltered but enthusiastic. He wasn't dumb; he wasn't the butt of every joke; he just didn't understand a lot about human society. And he was so dang genuine and kind that he won over everyone around him. That's where the heart of this story should be.

Also, I hate the song Santa Claus Is Coming to Town and maintain that it wrecks the end of the movie. Replacing all music with engaging, bouncy original tunes and replacing all jokes about bad singing with jokes about it being silly/embarrassing to sing in public (all of these folks are professionals, they've got lovely voices and it would be dumb to pretend otherwise) go a long way in my book. 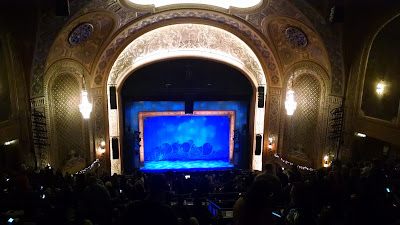 Many of these songs were played in abbreviated form in the animated adaptation, but on stage, there's time to bring in a full chorus and dance numbers, which makes them much more engaging. Many of the minor characters had time to shine.

I loved the Santaland manager's role in the decorating song, Sparklejollytwinklejingley. The theatricality of this song worked really well, with choreographed decorations and presents flying, spinning scenery units, and a tree that "grew" onstage.


A few other great uses of live theater: all the elves were played by dancers with shoes on their knees and tights that blended into the floor color. Buddy and Jovie got to go skating on their date with rollerblades cleverly disguised as ice skates.

Deb, the highlighted staff member in Buddy's dad's office, was a ton of fun. She has a big role in the father's song about Christmas getting in the way of work, and she takes charge of Buddy when he comes to the office, teaching him to make "snow" with a shredder. Of course, this backfires later...

(This backfire I allude to is both funnier and less cringe-worthy than the scene with Peter Dinklage in the movie.)

Also, Buddy sings about New York's lack of belief in Santa with a bunch of out-of-work Santas in a Chinese restaurant in a number choreographed with some Fosse-worthy chair action. Awesome. (Here's an earlier cast doing a similar version.)

I have nitpicks, of course. There were a few unnecessary reprises and a couple dance numbers that went on a smidge longer than were good for the story pace, but overall I really enjoyed this take on the story.
Comedy Lindsay live event Musical